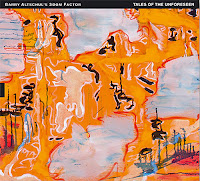 Barry Altschul's 3Dom Factor is becoming one of the strongest jazz trio in recent times. An unusual joining of forces from different generations -- the veteran drummer Barry Altschul, rising star saxophonist Jon Irabagon, and the great bassist Joe Fonda. Altschul and Irabagon first played together on the riotous Irabagon album Foxy. The collaboration went so well that they formed a trio, with Fonda joining on their initial recording the 3Dom Factor, a more muted effort than Foxy, but featuring more complex and intricate improvisations. On their second and newest album, Tales of the Unforeseen, the trio raises their level of play, putting forth a six track album of vibrant improvised music, hard edged yet very uptempo.

The “Unforeseen" mentioned in the title refers to the intent of having all improvisations, no planned approaches or compositions. However, they decided to include two tunes that they have played live, “Ask Me Now” by Thelonious Monk, and “Miracles” by Annette Peacock. This was a smart decision, as it gives some balance to the other four tracks, which vary in length from just over four minutes to over twenty-five, ranging from fiery free playing to subtle funky rhythms. There is a sense of empathy and tightness of the trio that recalls the seemingly telepathic communications of Jimmy Giuffre’s heralded trio from the early 60’s. In some ways, it feels like the 3Dom Factor is a contemporary version of that group.

“As the Tale Begins,” the opening track, is a grand opus, a 26 minute beast of a starter, with a bristling bass line from Fonda, and a plaintive and earnest solo from Irabagon, recalling Coltrane and Pharaoh Sander in manner, spiritual, with deep throated guttural phrasings. It then evolves to a more agitated state, bass and drums more aggressive, saxophone darting in and out like a prize fighter, boppish but more freely played. Irabagon has a sequence of highly complicated phrasings in a solo that is fluid and assured. Altschul follows with a solo himself, low key yet sharp and an effective response to Irabagon’s solo. Then the music evolves into a sonic free for all, Irabagon turning his sound into a series of animalistic blurts and rat tat tat utterances, while Altschul and Fonda mix it up with rapid fire percussion and bass, all the while staying remarkably even tempered. Then it becomes minimal, a tapping of the stick and a one note pluck, with a light squeak of the horn for several minutes. It concludes with a contemplative note, the trio creating several soundscapes varying in mood, from cerebral, to bop, to a speedy free jazz finale.

“A Tale of Monk: Ask Me Now,” is a gorgeous rendition, Irabagon with some gorgeous mellow tones throughout, offset by some dark bass notes by Fonda, I have not heard Irabagon more assured, and the two veterans make for a wonderful complement. “The Tale Continues” features a long bass solo by Fonda, followed by Altschul and Irabagon for four minutes of dynamic and even tempered interaction. And I think that is one of this album’s strengths is for all the range in tone and tempo, there is a solidity to their approach that they can explore a wide range of sounds and moods without breaking their own form or temperament. “Annette’s Tale of Miracles” is an example, a Peacock composition that is the most aggressive and dynamic of the tracks, yet the 3Dom Factor takes it and enriches it with their form of interplay, fast without being hysterical, hard but not cold, and above all, intricate intertwining their sounds to form a greater and richer whole. “A Drummer’s Tale” is a Barry Altschul solo. ‘Nuff said. The final track, “And the Take Ends,” has Irabagon on flute, playing off of Fonda’s bass, going from slow to fast tempo, assisted by Altschul’s brush work, before evolving to an insistently repetative bass line that take over the tune with its low key funkiness. This evolves to being an accompaniment to a lead, as Fonda changes tempo to where they others follow — switching from flute to sax, Irabagon riffs off of Fonda like Gene Ammons, soulful and playful, Altschul driving them both to the album’s highly satisfying conclusion.

Tales of the Unforeseen is an dynamic trio album that should be heard, a journey by three musicians who weave, through their high quality of play and consistency, improvisations that are stimulating and rewarding to the listener. This will be one of my albums of the year for 2015, and gets my highest recommendation.
Paul on Friday, November 13, 2015
Share

Thanks for drawing my attention to this outstanding album, keep up the good work.

Thanks for this wonderful review Stefan. Barry Altschul is probably my favorite drummer. You covered all the bases in this well written review. As soon as I heard about the release of this cd it was a no brainer purchase. Thanks again for the review my friend. :>)