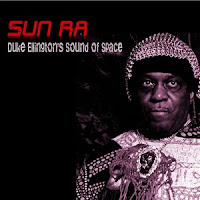 The Sun Ra catalog has more than its fair share of audience recordings; but a disc of Duke covers seems worthy of release even if the sound quality is marginal.  Or downright shitty...  two and a half minutes in, loud movements of the microphones overshadow the sound of “Perdido” completely – which is played reverently, but loosely.  This kind of recording is great for a free youtube download, but how are you going to feel about it after you’ve plunked down the list price for the CD?

After “Perdido” finishes setting you up, “Ra’s Entrance” displays enough killer groove and ritualistic phantasm to knock you down like a bowling pin.  Ra then freely plays the melody of “East St Louis Toodle-Oo” before moving into the tune’s signature vamp, which is where the drums and bass enter.  When the horn section chimes in, it’s a magical moment.  It is here where Duke’s arrangement gets the full Arkestra funkified workout, a loose and free interpretation by the most disciplined of players. (It’s the flipside to Duke’s band arrangements, which were incredibly tightly performed by men who were known to drink and occasionally fight like pirates.)  Bruce Edwards provides a bluesy guitar counterpoint to the horn arrangement, making this a beautiful track overall – and the lo-fi recording puts you right in the audience.

Ra again opts to open “Satin Doll” with a solo interpretation of the theme.  Again there is a short vamp and BANG!  The whole band joins in.  It’s a bit bumpy though, as the tempo seems a bit too quick for the Arkestra’s funky swing to properly manifest.  Ra plays a fantastic break, which is interrupted by someone shouting “I didn’t think he had chops like this anymore” – but again, it puts you right there.  Reed men Marshall Allen and John Gilmore both get solo time here as well, and as the horns become more prominent they punch their way through the band in a way that the slightly jumbled mess that started the ensemble piece is corrected.  Ra takes a stride solo before the band takes it out to a solid finish.  It’s classic Arkestra: a little wobbly, messy, disciplined, dynamic, traditional, unorthodox, sweet and sour.

“Sophisticated Lady” follows in the same vein, with an arrangement that is loosely faithful to Duke’s.  There are several solos here, including ones from the two trumpeters, Ahmed Abdullah and Michael Ray, plus one from Ra – but the stars here are Gilmore and Allen.  Gilmore follows Ra’s tasteful and precise break straddling the line between melodicism and freedom in a way that seems to embrace both while rejecting too much of either.  Allen embraces melodicism and freedom in equal parts as well on his subsequent solo, but draws more division between the two styles.  It’s a fascinating listen.