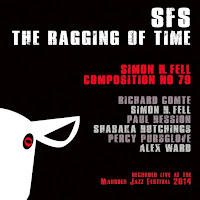 What does it take, in 2016, to surprise listeners conditioned to the unpredictable riches of creative music? I’ll speak from recent personal experience: I started up one of Simon Fell’s latest releases and sat back while the audience applause came and went, at which point a few pick-up snare notes ushered in a kind of Dixieland swing. Fair enough, I thought, tapping along relatively unfazed—until just a few seconds later everything cut out mid-phrase. I was checking my headphones for an interrupted connection when I began to hear faint breathy noises and soft bowing. Before I knew it, the Dixieland melody was back, only to disappear literally five seconds later, replaced this time by a more confrontational brand of free improvisation, barbed with brittle guitar and disparate percussion. Hardly was the first minute over when the swing surfaced once again…

The Ragging of Time was commissioned by the Marsden Jazz Festival and recorded there in 2014. According to John Quail’s liner notes, the Festival wanted a composition that would help “restore the birthright of early jazz to make those traditional sounds new, to make them shocking, to make them the ‘Devil’s music’ as it was once before.” While “shock” may be an extreme term to apply to the double-take episode described above, the effect may be analogous to Nate Wooley’s recent and more personal homage to traditionalist champion Wynton Marsalis, where in a certain simple sense reversion becomes advancement. But like Wooley, Fell avoids the potential traps—irony, gimmick—laid for him by his ambitious project.

In an essay on Joe Harriott, Bernie McGann, and “Ornettocentrism,” John Corbett criticizes the reductively linear dominant narratives of the jazz tradition, arguing that “the real stuff of jazz” is both “recursive, looking deep back into its past, and futuristic, skipping ahead several steps on the time line.” The disarming leaps in the first moments of The Ragging of Time exemplify, almost in caricature, this sense of nonlinearity (what Joe Morris terms an “ontological perspective”). Rather than a Disneyland tour of “jazz through the ages,” we get multi-directional collision, juxtaposition, and montage: a more accurate representation of the complex ways in which influence actually functions—and thus the ways in which jazz history is actually experienced, interpreted, and carried forward by musicians. But neither does Fell slip into a simple binary pattern, overemphasizing the contrast between the extremes of early jazz and contemporary improvisation. Instead, across three long sections, he explores a wide range of styles and references—Dolphy, Lovano, and Webern are mentioned on the label site—sometimes butting them up against each other, sometimes superimposing one over another, sometimes inhabiting the gray areas in between.

Of course, the audience isn’t clapping at the idea alone. Even an interesting concept like this has limited value without skillful and inventive musicians to realize it. For The Ragging of Time, Fell assembled a strong sextet responsible for many highlights beyond those first few moments: Percy Pursglove on trumpet, Alex Ward on clarinet, Shabaka Hutchings on bass clarinet, Richard Comte on guitar, Paul Hession on drums, and Fell himself on double bass. Later in the twenty-three minute first track, “Lebam Lebam (Un Cauchemar),” after some equally lyrical and textural trumpet playing from Pursglove, Ward takes a wonderful solo over a swing section, pushing the traditional idiom to its limits. In “Unstable Cylindrical Cycle” Comte turns up to crash an ongoing moderate 6/8 rhythm pattern; there’s great fun and tension in hearing one era, one sensibility, overlaying another. A little deeper in the same track, Fell, Hutchings, and Ward improvise an absorbing meditative passage. And “The Human Omelette (1926),” the final track, begins with more impressive group improvisation before soaring off into uptempo swing—which suddenly stops, resumes after a while, and then cuts out again… But if you think you’ve got the picture, go listen to the music itself and see for yourself what all the applause is about.