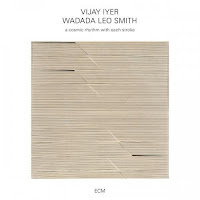 Let’s get this out of the way: I know the star-rating is the backbone of album reviewing, and this blog in particular has had a nearly unbroken run of awarding 5 stars to Wadada Leo Smith. In a way, I think that blocks a reviewer (in this case, me) from getting to the heart of what Smith has accomplished in his career that elevates him to this nearly flawless level. In part, it’s his approach to both composition and improvisation, and the evolution of his nearly 50-year-old musical language, Ankhrasmation and his concept of the rhythm unit, where an audible sound is followed by its equivalent in silence. Similarly, Vijay Iyer has combined jazz piano with his background in physics with sonic influences of his Indian heritage. He creates these spaces where his collaborators are equal partners and space and time are constantly in flux. And so I think the challenge in reviewing this album is, how do you rate two masters? If Divine Love, perhaps one of the greatest albums ever, was released tomorrow, how do you rate it on a scale of 5 stars? Is this album equal to Divine Love? No, it isn’t. Few albums in Smith’s own discography are its equal. And regarding Iyer’s discography, his trio has released three gorgeously postmodern masterpieces. So it comes down to the music itself, to this particular record. And my takeaway is, it’s really, really great. I’ve listened to it about half a dozen times already, and I really have only one complaint, which I’ll get to later.

As Troy explained in his Mutations review, the notated passages foreshortened the material somewhat, restricting Iyer’s typically fluid approach. So, it’s refreshing to start up “Passage,” the opener of the album, which begins on a foundational cyclical figure from Iyer, as Smith blows free, languid phrases overtop. At two minutes in, when a signature Smith trumpet blast pierces through, it’s less the dramatic moment it might be on other Smith albums, than a high tide in the waves of sound that define this piece.

The suite that fills 50 minutes of the album and gives it its title, “A cosmic rhythm with each stroke (for Nasreen Mohamedi),” is dedicated to the artist Nasreen Mohamedi (the suite’s titles all come from her diary entries). “All becomes alive” builds slowly, with Smith starting unaccompanied, and Iyer layering in electronic textural details. Towards the end, as the playing crystallizes, Iyer’s piano moves to the forefront, and he finishes the movement with a gentle solo outro. “Labyrinths,” a later movement, is complex and driving, highlighting some brilliant dual improvisation. Smith is muted at the opening of “Uncut emeralds,” while Iyer peppers short, mysterious runs that take full advantage of the piano’s broad range. Sounding almost nothing like Cecil Taylor, I was yet reminded of Taylor’s fine duets, his prompting of both partner and listener.

The final track, “Marian Anderson,” is credited to Smith, but the piano solo near the end is one more reminder of how vital collaboration is to his music. The piece would remain half-finished without Iyer’s contribution, though I’d love to hear a solo recording. It’s been years since Smith has recorded a solo album, and the one thing lacking on this album, if anything, is the range of instruments he brought to Kulture Jazz. Iyer layers electronic elements and switches from piano to Fender Rhodes, but I do miss the extremely broad palette Smith has to paint with.

I’m going to guess the dominant metaphors “master and apprentice” or “teacher and student” will drive responses to this album. Or else a dichotomous “heart and head” or “left/right brain.” Resist these interpretations. With Smith and Iyer’s complementary approaches to collaborative improvisation, there is a real spiritual synergy.

We've had lots of five star ratings recently, Lee (and I have to admit that I don't see the greatness in all of them). But this one here is an excellent album in any respect. I don't miss the broad palette, as you put it. To the contrary: I enjoy the minimalism of the album, it's wide range of styles. Even ECM's often criticized specific sound is perfect here.

Martin, I agree with you about the minimalism, which is ultimately why I didn't hold that against the album itself (hence the 5 stars). However, I would very much like to hear them record another duo album with that broader palette. My brain keeps wanting to mash up Kulture Jazz with Fieldwork, and I suspect it would be excellent. In some ways, like the thoughtfulness and delicacy, this is an album that could only be on ECM!