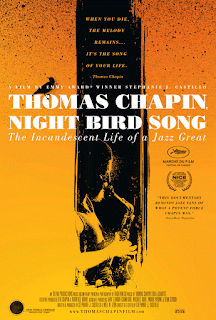 A few weeks ago I had a chance to catch a screening of this new documentary on saxophonist/composer Thomas Chapin. It was an early cut of the film, and about two and half hours long. Not knowing a tremendous amount about Chapin, I went in thinking that 2.5 hours on a sunny Sunday afternoon is quite a commitment ... yet as the film neared its end, I was not ready to leave, I wanted to -no, needed to - see and hear more about this tremendous musician.

Stephanie Castillo, the filmmaker, is the sister-in-law of the late Chapin, who passed away from leukemia in 1998. She turned her eye towards making a documentary on Chapin a few years ago, after not really know him when he was alive (she explained in a Q&A that she lived in Hawaii, while her sister Terri lived in New York with Chapin). What she uncovers is a rich and focused life that comes into sharp relief in light of his untimely death.

The film, using footage, photos, documents and interviews, presents Chapin's life in two parts: the first a rather chronological log of his life growing up in Connecticut, his family, his growing musical interests, and his studies at Rutger's in the early days of its renowned jazz program. The film moves on to his work as music director of the Lionel Hampton big band, the fury of his group Machine Gun, and finally the creation of the Thomas Chapin Trio with bassist Mario Pavone and drummers Steve Johns and Michael Sarin. In watching the arc of Chapin’s foreshortened career, you cannot help but see how his ambition and focus were always underscored by his humanity and genuine curiosity. It can be humbling to watch.

The second half delves into some darker topics. There is mention of a brief period of alcoholism, followed by Chapin's spiritual discovery and his creation of the group "Sprits Rebellious" - a deep dive into Latin music which is still as fresh and enjoyable today, as evidenced by the performance by guitarist Saul Rubin and bassist Arthur Kell at the film’s screening. This coincides with the success of the Thomas Chapin Trio and the brilliant string of albums on the Knitting Factory label and is explored through conversations with people who knew and worked with Chapin, including Knitting Factory Label founder Michael Dorf, Downtown Music Gallery owner Bruce Lee Gallanter, bassist Mario Pavone, guitarist Saul Rubin, Terri Castillo Chapin, and many others.

In the final stretch of the film, we are confronted by Chapin's illness, which manifests during an extensive trip to Africa. It’s hard not to be swept with emotion as you watch this man who put so much energy into his music and had so much his lust for life, be taken by cancer.

My one complaint is that I wish there was more and higher resolution video footage of Chapin at work. I suspect that when he was working at his prime in the mid-80s through the mid-90s, it was just harder and a bit more costly to do video - not everyone walked around with HD video cameras like they do now, just rampantly documenting!

Needless for me to say at this point, Night Bird Song is a moving film that will hopefully present Chapin's small but brilliant body of work to a new set of appreciative listeners.

The filmmakers are now taking the work to the major film festivals, and you can check with the Downtown Music Gallery as they may have DVD copies of the film available.

The film can be viewed Wednesday, April 27 at 8:30 pm during The New York City International Film Festival. http://www.nyciff.com/thomas-chapin-page.

Thanks Paul for posting. Wonderful review. I wish I had known and played with him, but unfortunately, I did not. Your review and the video was a step for me to learn more about him

Thanks for the terrific overview of the film, Paul. I know this has been in the works for a long time--it's great to know it is released and generating some positive buzz. I will look forward to seeing it as soon as I get a chance.

Thank You Paul for your review of my film! So happy to see it here and that you are sharing it with those who might not have known him. I can't wait for my film to get out there, to really get out there, so people can come and see what you and what we who have seen it are raving about! It is truly a must see, I have to say. It's enriching, uplifting, and can be "transforming" as several who viewed it said. It's a powerful film and Thomas has a powerful story with a powerful message and powerful music. I will keep putting it out there as much as I can!! Thanks for your help Paul! Stephanie Castillo, the filmmaker