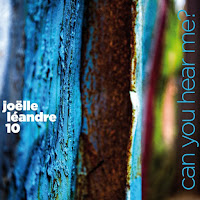 French double bass master Joëlle Léandre is known as a unique and innovative free-improviser who keeps expanding the sonic palette of the double bass, but has rarely focused on the field of orchestral composing. Her major composition so far is “Can You Hear Me?”, dedicated to Léandre parents, written for a tentet and premiered in the 2009 (and released as Live at the “Ulrichsberger Kaleidophon”, Leo Records, 2011).

This is a reflexive work-in-progress that addresses Léandre's, or any other creative artist's, existential question, a cry for an echo from another presence. Why do we keep creating this kind of art? Do we reach audience's minds and hearts? Do we change the audience's conceptions about art? Social conventions? Gender issues? What about politics? Obviously, Léandre's art is always very personal, as it radiates her restless, passionate and often funny character, yet she is also a very political person. Léandre is always looking for means to shake and change old and archaic conventions and institutions - in art, in society, and in politics. She demands a better, egalitarian, and more compassionate approach, and quite often tends to mock the pretentious ones who cling to some kind of a superior status.

This re-creation of Can You Hear Me? was also recorded live on January 29th, 2015, at L'Arsenal, Metz, France. The instrumentation of the tentet is the same as on the previous recording but the personnel is different. The former recording featured an almost all-Austrian ensemble comprised of musicians that have not played before with Léandre. The new tentet features an all-French ensemble with few close musical partners of Léandre as trumpet player Jean-Luc Cappozzo, violinist Théo Ceccaldi, and his brother, cellist Valentin Ceccaldi.

As on the previous recording this composition reflects on Léandre past collaborative work with iconoclast composers as John Cage and Giacinto Scelsi, but echoes her forty years career and integrates elements of free jazz, free improvisation and some that are more common with noise and even prog rock. But it is not a nostalgic work. Léandre structured it as a 9-untitled pieces suite that make full use of the rich and colorful language of the tentet, constantly generating and encouraging individual, imaginative interpretations from all the musicians. The tentet deepens the atmosphere of an organic, collective chaos, but at the same time Léandre navigates the myriad musical events into a cohesive narrative. Léandre takes the lead only towards the end of the composition, first with an expressive, lyrical double bass solo on the seventh piece, then singing in theatrical, operatic voice on the eight-piece, transformed into suggestive and hypnotic chanting of syllables on the last, ninth piece.

The debut recording of Can You Hear Me? sounded more ecstatic and urgent. This version emphasizes its subtle language and the clever metamorphoses between the different parts. Both highlight the absolute musicality of Léandre, one-of-a-kind individual and both are highly recommended.