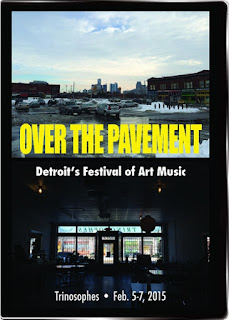 Watch out NYC - Patti Smith gave up on you years ago and Jeremiah's already signed the DNR. Artists have always been pushed to the periphery, but when there isn't a periphery any longer, they, and the cultural vitality, move on. And if I had a hunch to where it's going, I'd keep my eyes peeled west, mid-west that is.

Tom Weber's Over the Pavement - Detroit's Festival of Art Music is a documentary of the experimental music festival bearing the same name held in, obviously, Detroit, Michigan. Some bigger names, known to readers of the blog, like Fred Longberg-Holm, Susan Alcorn, Thollem McDonas, Marshall Allen, and Battle Trance adorn the set list, and through choice selections of each set, viewers are introduced to the humming talent of the former Rock city.

The documentary is a matter of fact portrayal of the festival, and as I watched it - getting an eye and earful of local sound and color - it dawned on me that this was a young scene, teeming with possibility, enjoying what seems to be a city with right conditions to foster experimental music and arts. The setting looks right - a small stage and exposed wiring. Slightly out of frame, I expect that there is a step ladder with a yellow bucket and a dingy rag in it. Shit, this is exactly where music is made.

Look over there! Dry ice factory


Good place to get some thinking done ...

Anyway, Weber's production perfectly captures this DIY festival in its imperfect (there were a couple of guitars that could be tuned a bit more), but perfect, state. The recording is titled so you know who is playing, every set is given equal care and attention, the camera zooms in for close shots, and the sound is nicely balanced. You can watch it in pieces, checking out different performers, staying for a bit, maybe checking out someone else and then coming back. I'm going to refrain from delving into individual performances and rather take it as a whole, as a document of energy, creativity, and new spaces.

Festivals like these are vital - seek them out, support them, hope someone is documenting them too (or do it yourself!). They exist in NYC too - of course, I haven't written the place off for dead quite yet. Anyway, I have nothing but good things to say about this ample three hour DVD, available at a very reasonable price http://tomweberfilms.com.