This year, Chicago-based saxophonist Dave Rempis began a download-only series on his Aerophonic label. While I'm passionately dedicated to the physical medium, the digital releases of side projects, live shows, and the like, is not something I'm complaining about! 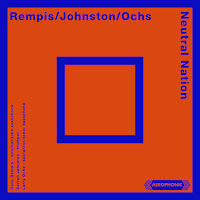 In Spring 2015, Dave Rempis - alto/baritone saxophones, Darren Johnston - trumpet, and Larry Ochs - sopranino/tenor saxophones took the work they began on 2014's Spectral on the road. Neutral Nation documents the tour with a show recorded at the venue Hallwell's in Buffalo, NY. The sound is quite good, capturing the smallest nuances to the full onslaught of reeds and brass.

There is nothing traditional about the work of this trio, the lack of rhythm and harmonic support leaves a big space for their ideas to grow. And grow they do as evidenced by the two long tracks presented here. As 'Pierce Arrow' starts, the intensity of listening and reacting that this trio engages in becomes obvious - snippets will often connect, though sometimes not, friendly dissonances and passionate musical arguments arise, all connecting with a larger musical purpose.

A companion piece to Spectral, Neutral Nation is an excellent reminder of the magic of live playing and pure improvisation, taking their previously recorded concept one step further. 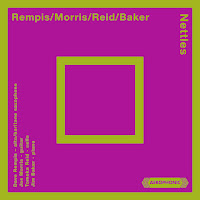 Nettles is a collaboration between Chicagoans Dave Rempis (sax), Tomeka Reid (cello), Jim Baker (piano) and lone New Englander Joe Morris (guitar) and was, according to the Aerophonic website, born from an effort by Morris to become better acquainted with the thriving Chicago scene. A series of concerts organized by Ken Vandermark in the summer of 2013 made this possible, and Nettles is from a show at Elastic Arts from August that year.

The result of this meeting was an ad-hoc group that is quite finely attuned, listening and adjusting to each other, and improvising music that is both fragile and robust. The first track, "White Dead", clocking in at 24 minutes, begins with a series of short airy puffs from Rempis, followed by reserved entrances from Baker, Morris and Reid. The playing grows stronger: a fast run from Morris, a trill from Rempis, scrapes of the string and plucks from Reid, and increasingly longer melodic snippets from Baker. Then it suddenly drops off and the musicians begin to re-establish themselves, first in a lovely ballad between Reid and Baker, then a passage where Morris joins, his melody augmented by the piano and sustained tones from the cello. When Rempis re-enters, it’s a lithe melody that comes to the fore, and again Baker’s piano work is an integral partner. The intensity comes not from volume, but from the intricate combination of tempos, configurations, and evolving motifs.


At times introspective and at other times outgoing, Nettles runs circles around the MBTI. From "White Dead" to the closing "Spotted Dead", this is a captivating recording.