Peter Brötzmann: An Update on the Latest (Day 1)

"Will Brötz ever stop going, on and on?", my friend Peter, a dedicated Brötzmann fan, asked me when I told him that there was another release by the great saxophonist on Holiday records (Eklisia Sunday, a vinyl release of a 2013 Not Two CD). He had to have it, even though he knew there have been more than a dozen new releases and reissues this year (and it’s only October) such as Songlines and Beautiful Lies, his album with the ICI Ensemble, and Risc, a recent album with Full Blast. But there are also negative voices. Julia, the host of the SWR 2 Freejazzblog On Air radio show, said she was puzzled by all these albums, that Brötzmann’s output was simply too much.  It might seem a glut, but Brötzmann is as close to a guaranteed seller as it’s possible to get in free jazz, and it’s primarily labels and other musicians who decide to release these recordings of his performances.  Brötzmann is also keen to support other ensembles. And, along with the touring, the answer might have something to do with the absence of pensions in free jazz.

Given the number of releases, we will spend the next three days covering them mostly in shorter reviews though some certainly deserve closer attention... 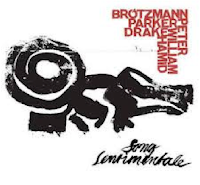 When Brötzmann started out in the 1960s, he was trying to find a language that could express what he felt conventional music was unable to do. In his attempt to find something new Brötzmann was standing on the shoulders of other giants who had asked themselves similar questions, though his early involvement in art exposed him to certain non-musical solutions, like the German Dadaist Richard Hülsenbeck, for whom the language critique of Dada started like any other critique - with doubt. Like them, Brötzmann asked himself if the continued use of existing modes could accommodate the kinds of things he wanted to say. And so he left conventional paths and started to express himself by ignoring the usual structures, looking to find fresh ways to address issues of modernity. In a career that’s spanned fifty years, Brötzmann’s playing  has changed. It now has a more nuanced vocabulary, aware of the simple but potent locutions at the core of the jazz tradition, combined with his own articulations – playing that is recognizably his own.

Song Sentimentale documents parts of a Café OTO residency with his longtime collaborators William Parker (double bass) and Hamid Drake (percussion). OTO’s own Otoroku label has released the music in split format, with different music on the LP and CD, using the same title and cover art. The music on these nights can be heard as the quintessence of Brötzmann’s oeuvre. The best example is “Stone Death”, Everything is in here: the opening call, songlike phrases, folk song allusions, the angry do-or-die improvisation, crassly overblown parts, relentless in their intensity. Initially, there‘s the old mad dog of the early days, grounded by a rhythm section that moves with the elegance of a ballet dancer. Parker and Drake shuffle and swing like hell, and adjust the temperature by speeding up or decelerating. Drake even throws in a rock groove used by Brötzmann to let loose. The last six  minutes present the “new“ Brötzmann, knee-deep in melancholy, playing of pathos which can almost bring a tear. Notwithstanding the album title, short, harsh outbreaks ensure that poignant doesn’t become sentimental.

“Dwellers in a Dead Land” presents a different Brötzmann, employing oriental and African rhythms, with Drake singing and finger-tapping on a frame drum, while Parker plays the guembri. Brötzmann is on tárogató, and as often when he plays the instrument, his lines sound closer to African and Far Eastern harmonies. In the middle of the track he drops out and returns on clarinet, dueling with Parker on shenai, a reed instrument similar to the oboe - European free jazz iconoclasm meets Indian trance.

The LP‘s a good example of what has become a typical Brötzmann’s performace (although his health is sometimes not the best these days). The set begins with his familiar call to arms, followed by variations on tárogató with Drake delivering a polyrhythmic salvo while Parker’s bass supports with a pungent pulse. It’s a pleasure to listen to a group able to submerge so deeply in their music. The structures are similar to the CD performances. After a take-no-prisoners intro, it’s time for the blues. Brötzmann’s sad melodies are soon replaced by a rough tone but Parker and Drake keep the blues fire burning.

In the twilight of his career, Brötzmann seems to be fully conscious of his art, and its potential, drawing on the language he helped invent and what he considers to be the essential elements of jazz history. Even when things seem more accessible, they’re far from being convenient. This is powerful, invigorating, challenging music. Both releases are among his best in recent years. They are a must for Brötzmann fans and a good entry point for newcomers.

Available via www.instantjazz.com, downtownmusicgallery.com. and the label's websites.
Paul on Tuesday, October 18, 2016
Share