40 Years On The Road 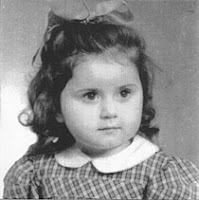 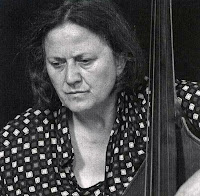 We agreed to have a Skype interview, and even though my questions were duly prepared, the grand lady of the bass has so much drive and energy that the interview does not need questions. She speaks like her music, her music is like she is: passion personified.

She lets me know that she is flattered by the attention she is getting, not only from us, but also from the record labels who bring out new material by her, from the labels who offer her a concert (today!) in a church (Eglise Saint Eustache) in Paris to celebrate her 40 years on the road, together with Mat Maneri, Maggie Nicols and Christiane Bopp. She is flattered by the long article in Le Monde, the leading - and very respectable - French newspaper.

How have you changed over the last 40 years?

When I was a kid, nobody ever noticed me. I was so quiet. Nobody knew where I was. That is no longer the case, but for the last 40 years, I have not changed. My basic philosophy is still intact. I believe in “man”. I believe that people have to do what they have to do. In my opinion, there is no difference between a poet, a musician, a butcher or a baker. They all work with skills and interest and creativity … and lots of hard work. I worked hard on all my skills, and I still do, to master my instrument, the technique, the sound, the texture, the build-up and construction of my music. This hard work is needed to be able to express the essence, to create art, much like a painter, a dancer or a poet does. You cannot speak of a career. I am not trying to get higher in a hierarchy. I am on the road. I like that. My father was a road worker. I like to think that I walk on the roads he built. I move forward. I meet people. It’s a solitary journey, but a rewarding one, because you can learn from other people, you can give to other people. You meet another person, say a dancer, and she can teach you how to make music, just because of her dancing. You interact, you communicate no matter where you are. You find a common language and you learn from it, you become richer.

Is that why you have a preference for duet recordings?

I don’t like large families and their reunions. Everybody is there, yet you only manage to really have a conversation with one or two people. I prefer the intimacy of this real conversation with one other person. I like to listen, to understand the other perspective, her story, deeply listening to expand on it, to resonate with the other, to move along. It’s so much deeper, so much more authentic in its interaction.

Where did your road start?

After my classical training in France, I moved to the US to play with Morton Feldman, but my real inspiration, the deep sense of music has come from African American jazz musicians, and interestingly enough in Europe. One revelation was listening and talking to Cecil Taylor at Saalfelden festival. He saw that I was anxious and he said to me “Don’t care Joëlle, go ahead, just play your shit”, it was a great encouragement to let myself go in my sound, to be myself. It was like he told me to invent myself, to open doors for which nobody but you has the keys. The thing is to be alive in your music, to be yourself. Raw and fresh. People will not judge you when you are being yourself. They will when you play a role. And this is more difficult for women than for men.

You have always been a great advocate for women in music.

Yes, I have always loved to play with people like Irène Schweizer and Nicole Mitchell and Maggie Nicols. There are not enough women in music.

Yes, these are good examples, but there are still not enough women in music. We need 300 Lina Allemanos. I think sometimes women lack the persuasion to move beyond the traditional boundaries. The funny thing is that as long as I lived in France nobody took me seriously either. It’s only when I moved to the United States, to Germany, to Japan, that I was looked upon in a different way. You’re a foreign musician residing abroad, and that by itself is already interesting, something that creates curiosity. Suddenly people notice you. Every artist should leave his or her home country. No man is a prophet in his own land.

You also have strong views on society

“Je suis la femme qui marche”. I am very politicised in that sense. I have a broad view on society and humanity. That drives me. Yes, I am an angy woman. I detest what’s happening in the world. I hate what’s happening in music and how the establishment looks at music. When you have a quartet of two violins, a viola and a cello, it is immediately appreciated and it’s called music. When you create a quartet with two double basses and two electric guitars, it’s considered subversive. Yet that’s needed to change the world. We have to break these silly rules and codes. I have never changed myself. I have kept my anger with all the negative things that are happening, but I can say that I have structured my thinking around it. I read a lot, and that helps to understand. I never understood that there was such a thing as “noble” instruments, like a violin, a cello, a piano. But a double bass and percussion instruments do not belong to the class of “noble” instruments. Why? Who decides about this? That same system delivers “old young people”, they are young of age, but old of mentality. They know all the forms and they manage the technique with competence, yet it’s often so empty. Where is the substance? That’s why I like working with young people, in the hope that they can find their own voice. I organise music workshops. I am quite honored to have been appointed visiting professor at Mills College in Oakland.

Who else influenced you?

When I left France, I met so many other people with great things to show. It was a privilege to play with Anthony Braxton. His open form compositions were a revelation. An opening into a world of new possibilities. He said “you need to be ready”. That means that you have to open up yourself to listen, to interact, to be part of what is happening in the music now, in this moment. Our contemporality requires new sounds. Our cultural institutions are not open to this. They are all led by white males. They decide on how subsidies are allocated. They decide which records are released. They organise the festivals. They decide about who should be successful. Yet they lack culture. Because of their narrow perspective, they do not represent society in full. Culture is the world around us, everything. They are only focused on something that is on the sidelines, but which they find interesting. They love hierarchies and differences.

And your music is the opposite?

Yes, music means opening up to this world. That is why I like to play with people like Serge Teyssot-Gay, who was the guitarist of Noir Désir (a French post-punk band). He is a contemporary artist from a different tradition and musical background, but that makes it so much more fun and interesting to improvise together. We don’t need all these labels that people stick on things. That’s why I also like George Lewis a lot. His vision is all about opening up to deeper levels inside yourself. On the surface, people say ‘she plays bass, she’s a virtuoso’, but that’s only on the surface. At a much deeper level, my music is political, a reflexion on things, like authentical thoughts and feelings. You cannot learn that. You have to find that yourself. And that’s what makes the value of wonderful people like Steve Lacy, or Evan Parker. John Cage said “the sound is the man”, and it doesn’t matter whether it’s Miles Davis or Vivaldi or Charlie Haden.

And how does improvisation fit into this?

It is trying to know how not to know, to have a complete opening to the outside world, a kind of innocence that lets you listen and go to the other one, almost naked and vulnerable. Improvisation wakes up and reveals. In French we say “révèle et réveille”. Most other music is made for the masses. It’s all the same, and it basically asks you to shut up. The supremacy of the composer tells you: play this and shut up. It’s mainstream. Media are commercial. Improvisation on the other hand brings about your individuality, your deeper self. You have no choice. I am very strongly indebted to oral music, music originating from people singing in villages and on the land, European folk, and blues, and other traditional forms who incorporate real story-telling. But this is looked upon with scorn by the ones in power. That’s why I value my brothers and sisters from America so much. They value the oral tradition. They showed me what was possible. I had the luck that in the 70s, Bill Dixon and Archie Shepp and the Art Ensemble of Chicago were in Paris. Listening to their music, and its possibilities was a true feast, an absolute joy.

You are also very theatrical on stage. You like elements of drama in your performances. You kick your bass, you shout, you laugh out loud.

I am a stage woman. If only because my bass has such a presence on stage. But I like to make fun of things. That goes back the dadaist tradition, it’s called the “desacralisation of the serious”, in the way that Eric Satie, Marcel Duchamps, Cabaret Voltaire en Joseph Beuys worked.

My first solo performance was in Buffalo, New York, 40 years ago. Already then, my music was all about building tension and bringing release, about existing and expressing myself. Humor is part of that, about bringing release. Women often take a distance from humor, but I like the approach of Han Bennink for instance. He gives himself completely, but with humor. I know my instrument, intimately. I know all the different sounds it can make, also the sound of the wood, when it gets kicked or slapped. The entertainment aspect is part of all art. You have to capture the attention and keep the attention going. I come from a family of clowns. It’s part of my heritage. It also means that I am free. I can do what I want. I do not have to conform. I determine myself. When I started so many years ago in Buffalo, I was nothing. I had no language. I had no context. I had no contacts. It had to learn everything and I had to unlearn everything. In daily life, in the street.

You always call your albums your “babies”. Why?

Like with children, I have no preferred CD. Someone told me that I performed on more than 150 albums, and I think that I have given my maximum for each of them. I have personally mixed or participated in mixing all my albums. All of them. I carry the music. I accompany it. I take care of it till the moment the album is finally brought to the shops. I have given my life to music, to my music. That’s why they’re my babies.