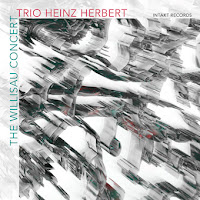 Though it may seem like a relatively recent development, free jazz musicians have never shied away from integrating electronic elements into their work; think of Bob Ostertag’s synthesized explorations on Braxton’s monumental Creative Orchestra (Köln) 1978, or Evan Parker’s ElectroAcoustic Ensemble, formed in 1990. One thing that has been lacking, however, is an incorporation of more varied electronic idioms - most free jazz artists are content to simply let the sounds act as accents or atmospheric overlays. Trio Heinz Herbert, consisting of Dominic Landolt on guitar and effects, Ramon Landolt on keys, synth, and samples, and Mario Hänni on drums, is a Zürich-based group that seems to be pushing for a fuller, more wide-ranging fusion of the worlds of free jazz and electronic music. The Willisau Concert documents a performance at the Jazzfestival Willisau in September 2016, and it’s a perfect encapsulation of the intriguing and idiosyncratic approach taken by the Trio.

The first piece in the set, “Granular Liebe / LEI,” opens with tentative guitar tones, a bubbling synth, and drums that rattle cautiously underneath. One’s first impression is of just how much physicality is present here - in particular, Ramon Landolt’s sound manipulations are akin to those created by groups such as Autechre; whether he’s releasing dense, bone-rattling surges of bass or skittering rhythms that recall chiptune in their manic relentlessness, his productions always seem to be carefully toeing the line that exists between “artificial” and “organic.” As the second half of the track unfolds, we get a taste of the ambience that Trio Heinz Herbert can create. Dominic Landolt’s guitar pushes along with locomotive persistence, Hänni steadily increases both the tempo and complexity of his drum-work, and Ramon Landolt bathes the piece in swirling, subdued sine-waves. As its title suggests, “Fragment Z” is an extended, yet skeletal, soundscape that finds the group flirting with free-form abstraction. As such, it’s the perfect palette-cleanser before “Bruggada” brings the three musicians back into the realm of structure and straightforward melodicism. Just as the next track, “Hyper Down,” seems like it will collapse back into formlessness, Ramon Landolt unveils an impressionistic and oddly affecting chord progression on the keys that sends the piece in another direction entirely. Dominic Landolt’s now-familiar guitar chug is a key component here, adding as it does a kind of textural glue to the composition.

The next two tracks, “Heinz Steps” and “Planet Cita K” offer a refreshing change of pace. The former is a foray into sinister psychedelia, one that dips its toe into several sonic pools: slippery shapelessness, funk-indebted strut, and, most surprisingly, blistering punk rock. The latter sees the return of Ramon Landolt’s soft washes of synth, in addition to introducing a series of evocative chants that call to mind New Age music - if it’s been radiation-fried and left stranded on the barren surface of an alien world, that is. Trio Heinz Herbert’s The Willisau Concert is one of the more inspired blends of electronic and improvised music that I’ve heard recently, and I’d highly recommend it to anyone who likes their free jazz on the “freer” side. No, there are no wild, skronking outbursts here - it’s not that kind of free. On the contrary, Trio Heinz Herbert are more interested in the liberation that results when the dividing lines between genres are shaken up, blurred, and (in some cases) discarded entirely.
Paul on Friday, April 28, 2017
Share