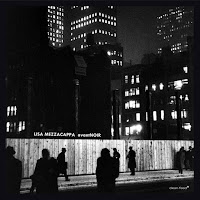 Avant Noir is Lisa Mezzacappa’s new album based on the noir crime fiction of authors Dashiell Hammett and Paul Auster. Those familiar with the works of these authors will recognize characters and scenes from the novels in the titles of the pieces, unfortunately wasted on myself, as I’m completely ignorant about these authors works. However, you don’t have to be a fan of their writings to appreciate the compositions that are contained within the album. Even though you may not be a fan of film noir or crime fiction writing, the sounds and clichéd images of this genre are immediately conjured up and recognized in the music. It could well be a film soundtrack for an unmade film such is the strength of the imagery, which is borrowed from the literary fiction, translated and then encapsulated into the sounds that still retain there avant and contemporary edge.

Written for the sextet of tenor saxophone (Aaron Bennett), electric guitar (John Finkbeiner), percussion & sound effects (William Winant), bass & samples (Lisa Mezzacappa), electronics (Tim Perkins) and drums (Jordan Glenn) the sound offers both the expected and the unexpected with regard to the range of timbres on offer. As well as the imagery of the overworked detective hard-up on his luck, standing in the shadows of a street corner at night in the rain we also get the blips and swirls from Tim Perkins electronics. These add a futuristic element to the music in the way that Dr. Patrick Gleeson’s use of the ARP synthesizer brought to Herbie Hancock’s Mwandishi band on Sextant. As well as the excellent orchestration of the instrumental timbres, Mezzacappa also introduces some concrete sound samples that really brands the film noir intention clearly into the music, with telephone sounds, screeching car tyres and typewriters to name a few.

There’s a good consistency to the album, which contains a cinematic feel due to the inherited literary thread, so each track feels equally important as another chunk of the storyline, so to speak. However, just to pull out a few tracks, at the centre of the album is 'Medley on the Big Knockover', a medley of three tunes, with the first part being 'Green St.' This starts with a rat-a-tat machine gun rhythm complete with car horns and electronic sounds evoking wayward and multiple police sirens, which breaks down into a folk-like melody that sets the scene for 'At Larrouy’s Bar' with it’s scampering and country-esque hoedown, a more blatant siren sound, chinking of glasses and background sounds of people mingling, before erupting into the free jazz blow-out of  'Montgomery St.'  This one track seems to distill the essence of the whole album into its structure and is like a paraphrase for the whole project. 'A Bird in Hand' starts with a distinctive descending melodic phrase on the guitar accompanied by a march-like rhythm on the drums before being joined by the sax, vibraphone, and bass. The rhythm drops out to reveal a soundscape of bowed and struck cymbals, vibe trills, electronic envelopes, fragmented interlocking guitar and sax phrases that accompanies a sampled dialogue which builds into sampled syrupy strings, bells, buzzers and what sounds like a musical saw, before revising the initial opening material. The first track 'Filmore St.', maybe not as overtly cinematic in its construction and material, contains a brusque angular melody before settling into a fragmented guitar solo, which flirts with the spiraling electronic sounds that take their own solo over the top of a group led punctuated and syncopated ostinato, before returning to a brief but developed version of the opening melody, phew! Events come thick and fast on this album but they are also carefully structured and organized.

Having not heard either of the authors’ writings, after listening to this album I feel like I’m missing something - maybe it’s time to hunt down some old books!