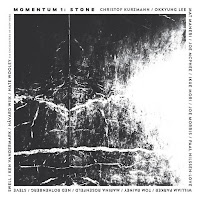 I would be hard pressed to come up with a musician who is as thorough and reflective as reed player Ken Vandermark. His January 2016 residency at the Stone was years in the making and he succinctly, but without skipping important details, sums it up in the booklet accompanying Momentum 1: Stone. The concert series began with a call from the Stone's John Zorn, who offered a week residency and requested 12 unique sets, and for which Vandermark then developed a program that was a who's who of the contemporary creative music scene:

In the end, Vandermark chose to include in Momentum 1: The Stone all of the projects that were so far undocumented. I personally was able to attended on two of the nights not represented here which included the Nate Wooley/Ken Vandermark Duo, DEK, Nilssen-Love & Vandermark Duo, and Made to Break. I call it a blessing - as I am now able to hear what I missed - and a curse - because what I did hear was fantastic!

Regardless, this box set represents a significant artist moment for Vandermark, and Lee, Eric, and I are excited to offer our collective thoughts on the music herein.  - PA

Inaugurating Ken Vandermark’s 2016 Stone residency is an exciting, compact set—part assertion and part exploration. During the initial of two quarter-hour improvisations, Vandermark’s first ad-hoc quartet—Vandermark himself on reeds, Ingrid Laubrock on tenor, Sylvie Courvoisier on piano, and Chris Corsano on drums—offers, to my jealous ears, exactly the fire and energy that a crowd eagerly awaiting this momentous occasion would crave. The observation most likely to become cliché over the course of these Momentum 1: Stone box set write-ups is how well—and how quickly—each of Vandermark’s makeshift groups fall together like longtime stage mates. Highlights throughout “Part One” include the many moments of counterpointed interplay between the two saxophonists, both full of contrast and entirely coherent. In “Part Two,” having already secured the audience’s attention, the quartet explores darker, moodier territory. For a while Courvoisier, whose convincing playing in any number of modes is one way to trace the shape of these improvisations, trades Taylor-esque jabbing for foggy banks of chords—then shifts abruptly into a brittle hail of high notes, perfectly matched by Corsano’s chattering on the rims. Despite some high octane climaxes, it’s this kind of attention to texture that distinguishes the second half of the set, with Courvoisier later strumming her piano strings, Laubrock strangling her sax, and Vandermark tonguing percussively. The group proves every bit as versatile and assured as Vandermark’s own playing always is, making the Tuesday set an ideal kick-off to the residency. -EM

If you’re like me, living outside of New York City, you probably also read through Stone residency lineups amazed at the new collaborations that coalesce during these events. Amazingly, Vandermark’s rich discography already captures many of these small, improvised groups (most recently on Nine Ways To Read a Bridge and Extended Duos with Paal Nilssen-Love). But, seeing that he assembled this trio with Joe McPhee and Mat Maneri gave me the feeling that something about this performance would be special. I was not disappointed. Listed as “Wednesday Stone (Early),” the whole performance is broken into six parts, running about 45 minutes in total. Throughout, the trio operates in a tripartite amoebic structure, creating episodic moments out of either parallel solos or as a tandem unit, with the third player exploring an idea on his own. Like a collection of linked short stories, the six parts seem to share an underlying timbre and pace, unhurried but not lacking for passion and force. Although there doesn’t seem to be an intentional break point in the performance itself, having the tracks delineated on the album serves as a signpost of one set of ideas ending as another set comes to the fore. As one would expect from Vandermark, McPhee, and Maneri, the playing is very focused, constantly drawing your attention and refreshing in its depth and beauty. -LRE

Disc 3 begins with a small calamitous crack of the drums and skronk of the sax. Drummer Tom Rainey and saxophonist Ned Rothenberg join 2/3's of Side A (Vandermark and pianist Havard Wiik) for what unfolds into a delightful high speed chase through free jazz territory. The intensity of track 1 is invigorating - I can only imagine the head nodding happing in the audience as the woodwinds' spitfire lines dodged in and out of Rainey's scintillating pulse and Wiik's inventive accompaniment. The group leaves no approach unexplored as in the same track they move through sections of high pitched percolations to off-kilter percussion solos. Track 2 offers a brief respite, a lighter duet between sax and drums. Though, as always with Rainey, there is more than one thing happening at any given time and he builds up an intensity on the drums that eventually proves irresistible to the other musicians and soon there are intertwining melodic lines, decorated with splashes of note from the piano. Flawlessly navigating the open roads of improvisation, these master musicians share a natural GPS. -PA

On this unbroken improvisation, “Thursday Stone,” features a quartet of Vandermark, Ikue Mori on electronics, Joe Morris on guitar, and Nate Wooley on trumpet. This collective connects the dots on a number of previous collaborations, particularly The Nows, which featured Mori and Vandermark on separate tracks with Wooley and Paul Lytton. And of course Wooley and Morris have a long history, most recently recorded on their trio with Evan Parker. Here, the improvisation is percussive and abstract, driven by Mori’s superb electronics and Vandermark’s pointillist improvisations. Early on, a wonderful duet from Mori and Wooley is held together by Morris’s connective tissue. Together, they establish a tension that’s masterfully picked up by Vandermark, who somewhat recapitulates their themes in a single, quick solo. He seems to have found a spiritual soulmate in Wooley, their duo albums East By Northwest and All Directions Home are recent highlights. And they really drive and push each other, taking some dramatic turns in a long section just about a half hour into the track. Following an absolutely gorgeous Wooley-Morris duet, Vandermark and Wooley pivot the group into an extended, slightly amorphous section. This leads into a fantastic duet between Morris’s guitar and Mori’s dissonant, chimes-like electronics that serves to unleash a fiery and dramatic group improvisation that’s sustained right up to the finish.  -LRE

Just hours ahead of the raucous free swinging finale of his Stone residency, Ken Vandermark truly put himself through his paces with one of the most difficult—and most rewarding—improvisations on these half-dozen discs. Listening to the early Saturday set is like stumbling into a sentient, trickster-ish alien world or a makeshift hall of mirrors: deceptive and almost dangerous in places but playful and even goofy in others. All thanks, of course, to the technical skill and superlative listening abilities of the musicians Vandermark has ingeniously brought together: Okkyung Lee on cello, Marina Rosenfeld on turntables and electronics, and Resonance Ensemble veteran Christof Kurzmann on ppooll and electronics. Even putting aside the live processing and sound manipulation tendencies of electronics, attempts to definitively assign each sound to its source prove both a fool’s errand and great fun, so chameleonic and quick-witted is the playing across these 40 minutes. Fans of Lee’s recent Cafe Oto collaboration with Christian Marclay won’t be surprised at how perfectly her sound can complement and even emulate a turntable’s, but when the effect is multiplied by four virtuosic improvisers, the results are that much more disorienting, that much more astonishing. To toss one more metaphor into the mix, this set is something of an electro-acoustic obstacle course for Vandermark, who, navigating with skill and strategy, tends to hang back ever so slightly, preferring more often to blend in with the total sound than to occupy the spotlight. Even at the height of a week-long celebration of his own work, Vandermark knows when to turn the reins over to his collaborators. - EM

Disc 6 is from the set that I cannot believe, in retrospect, that I missed attending. Here are some of my favorite players, gathered for an hour of classic improvisation. Their fit though really comes as no surprise: Vandermark and Paal Nilsson Love's duo work is always stellar, Swell and Love have recently been working with Peter Brotzmann in a fine trio, and Parker simply adds a magic touch in any situation. My hindsight regret is proven palpable in the mere opening seconds of the first track. Swell's trombone and Vandermark's sax are a potent combination and they play off of each other with confidence. Love is a flurry of activity and Parker's bass work is a knowing mix of pulse and support. Two minutes in and they are on fire. A sax and drum cadenza at 3:45 pivots the groups into a syncopated New Orleans-like march, then a bass solo follows. Swell's turn around the 10 min mark is terrific, radiating a barely containable intensity.  It's a joy to follow the morphing melodic lines and the ebbs and flows of tension and volume. While there was one more night to the residency, as a closer to the box set, one couldn't ask for much more than what this group delivers.  - PA