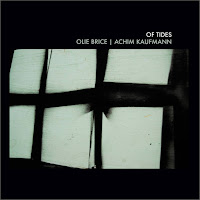 The art critic Clement Greenberg, who championed the paintings of Jackson Pollock, argued that the value of a work of art depends on the artist’s realization of the virtues of the medium, which in “each art is unique and strictly itself.” Using his concept of “medium specificity,” Greenberg judges a painting by how well it actualizes the possibilities inherent in its materials. A painting is made of paint, thrown, dripped, or layered on canvas. The art is “about” nothing so much as the materiality of its making. A painting fails if it relies on specificities from other media to create an illusion of space, or dimension, or to tell a story. “A painting is not a picture of an experience,” says abstract expressionist Mark Rothko; “it is an experience.” Avant-garde art is inscrutable, indescribable, and its effect on its audience is visceral. If it triggers ideas or emotions, they unfold as ungovernable connotations peculiar to each of us.


Olie Brice and Achim Kaufmann make avant-garde jazz with a similar intensity, movement, and spontaneity to Jackson Pollock painting. They play aggressively, percussively, with a no-holds-barred, take-no-prisoners approach. Their music does not rely on coaxing an audience’s emotional reaction out of familiar themes or mere technical skill. Instead, they rely on the material bodies of the piano, the bass, and of themselves. Like Mola Ram in the Temple of Doom, they reach into the chests of their instruments and rip out their beating hearts.

Olie Brice plays bass as if he’s jumped onto a bear’s back to throttle it but then tries to Greco-Roman wrestle it to the ground. It is mesmerizing because there is no way to predict who will win. His pizzicato pounds like a battering ram knocking down doors, or taps like a hammer on notes like nails. His bowing bounces and stutters, then soars and dives to rip open space. Few bassists leave me as awestruck as Olie Brice.

Achim Kaufmann’s body of work demonstrates a pianist constantly exploring the possibilities of his medium. His two Grünen albums (with Robert Landfermann and Christian Lillinger) are especially fantastic. Kaufmann plays outside and inside the piano. Like a bowerbird’s nest, his piano is filled with an odd assortment of objects used to make the piano scream like an overdriven guitar, tinkle like a harpsicord or autoharp, or ring like a bell or glockenspiel. He is always moving up and down, reaching inside the piano, adjusting foreign objects, scraping, tapping, or strumming strings. Sitting before the keys, Kaufmann invents clusters and lines like a classical avant-garde pianist.

There are five tracks on Of Tides. “Moss Grows in the Cracks” slowly accretes out of a slow droning. Kaufmann works inside the piano tapping, scraping strings like a guitarist doing a pick slide, echoing Brice’s arco. About half way in, Brice’s bass buzzes and vibrates so resoundingly, it’s a wonder it doesn’t fly apart. “The Rumble of Constant Adjustments” starts like a minor blues and becomes a twenty-three minute tour de force painted with everything on Brice and Kaufmann’s palettes. Brice’s walking bass lines wander behind Kaufmann’s rhythm and his dissonant, atonal chording. It is a showcase of the possibilities of their instruments and of the experience their playing can be. “Cogitations,” the short center piece, is meditative, contemplative, gentle and unhurried. It is the loveliest track and the one least likely to frighten the dog or cause your friends to call you “weird.” “To Heap,” as the title suggests, is an accumulation of sounds from Brice’s bass and Kaufmann’s piano that perhaps the instruments weren’t aware they were capable of making. It begins with Kaufmann’s heavy left handing and Brice’s throbbing pizzicato piling together in a scrum. Kaufmann’s prepared piano dopplers in and out of tune like an old juke joint vertical or the music on a slowly unwinding gramophone. He taps and plucks strings that ring like cymbals, or sing like violins, or drip like water on pipes knocking in an echoing underground tunnel. “To Heap” also features a three-minute sui generis bass solo. “Of Tides” closes out the album with Kaufman and Brice like the sea and wind contending. Brice’s bow bounces and skips across strings. Kaufmann’s piano peeks up, sounding like tubular bells that mutates into deep notes conjured darkly by his left hand. Half way in, waves of sound crash in stormy interplay. The song culminates in muted percussive chording from Kaufmann, playing the keys and inside the piano, reminiscent of both Steve Reich and Philip Glass. Like the tide, the music then recedes and washes out.

I am inordinately fond of Brice and Kaufmann’s Of Tides, and I am in utter admiration of Brice and Kaufmann’s playing. I have listened to Of Tides dozens and dozens of times, and it keeps yielding new things. Hearing it is, to me, like standing in front of a large-scale Pollock or Rothko. The effect is overwhelming—physically, intellectually, emotionally—yet without my being able to describe exactly why. Of Tides is by far the most compelling album I have heard in 2017.