Earlier this year, the LA-based independent label Orenda Records celebrated its 3rd anniversary with a massive night at Blue Whale. The night featured three sets of music and a gorgeous installation by artist Eron Rauch (who designs many of Orenda’s album covers). Founded by trumpeter Daniel Rosenboom Orenda’s name comes from an Iroquois term meaning “a mystical force present in all things that accounts for all human attainment.” The aim of the label is to promote music that pushes boundaries, sonically and philosophically. 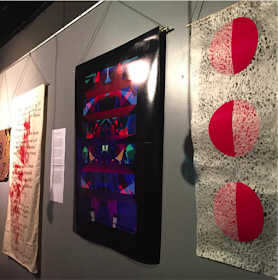 Rauch’s installation The Hall of Fallen Empires featured imagined flags from dozens of fictional empires from any time in history and anywhere in the universe. Many of the flags were printed and hung around the room, and there was a thick binder near the entrance with hundreds of pages on various fallen empires. The installation was visible for this one night only, and I spent a good half hour just walking around the room taking in the flags, and at least another 20 minutes flipping through the binder. Rauch’s brilliant project, which featured work by him and several of the musicians performing that night, complemented Orenda’s boundary-less aesthetic and set a tone of radical experimentation that continued throughout the night.


First up was Snow Nerds, a relatively new quartet with guitarist Jake Sucher, saxophonist Ted Taforo, bassist Anna Butterss, and drummer Jesse Quebbeman-Turley. Their debut album, Gup Life, is coming soon on Orenda, and their set served as a decent preview. Snow Nerds has a bright, zippy sound and a warm sense of humor (see: band name and album title), but the sound mix wasn’t kind. Quebbeman-Turley’s drums were heavy for the room, and the various textures and effects were often lost. That said, Sucher and Taforo have an excellent rapport, and Sucher’s knotty melodies leave plenty of room for some excellent improvisation.


Celebrating a decade of playing together as DR. MiNT, the quintet of Rosenboom, saxophonist Gavin Templeton, guitarist Alexander Noice, bassist Sam Minaie, and drummer Caleb Dolister don’t often get to tour together. Notably based half in LA and half in NYC, DR. MiNT plays a style of jazz-fusion defined by their approach to spontaneous composition. This was absolutely thrilling to see live, as Rosenboom and Templeton were constantly signaling to each other and collaborating on melodic lines in real time. Their voicing is so utterly in sync, with a dense middle provided by Noice, who doubled on guitar and electronics. Noice sometimes reminds me of early-2000’s Nels Cline. And playing an acoustic translation of electronic jazz-funk, Minaie and Dolister are an unbelievably adept rhythm section. Dolister, in particular, is amazing to watch in person. 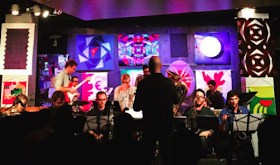 For the closing act, Rosenboom conducted a partially improvised orchestral piece for roughly 16 players, including Christine Tavolacci, Gavin Templeton, Michael Mull, Jonathan Rowden, Andrew Conrad, Brian Walsh, Ryan Dragon, Stefan Kac, Cathlene Pineda, Joshua White, Alexander Noice, Max Kutner, Sam Minaie, Caleb Dolister and Trevor Anderies. With layered horns, piano and keyboards, two guitarists, and DR. MiNT’s Wonder-Twins rhythm section of Minaie and Dolister, the anniversary orchestra gamely navigated Rosenboom’s conduction. A former student of Wadada Leo Smith, Rosenboom expertly guided the large group, highlighting each player in solo and signaling ad hoc countermelodies for winds and brass. It was the kind of performance I’d really love to return to, since I surely missed about half of what was going on. And yet, in so many ways, that was the point. Like the Hall of Fallen Empires, the Orenda Anniversary Orchestra existed wholly in the moment, a grand celebration of everything that’s great about Rosenboom’s Orenda Records.