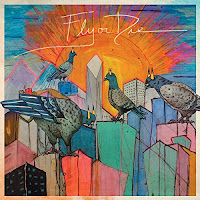 Much has been made of Jaimie Branch's move to NYC from Chicago a couple of years ago – especially about the fact that her new city quickly became the birthplace of her long-overdue debut album as a leader. Whatever NYC had to do with inspiring this thing, THANK YOU BIG APPLE. But make no mistake, this record is still the sound of Chicago. It's a sharply focused work that moves from one great idea to another quickly and – while retaining its originality - is also very representative of the last 20 years of a certain Chicago sound, with its musical precision and post-production work in the electro-acoustic realm of Tortoise or Rob Mazurek's many projects.

What you're getting here is 35 minutes of compacted and refined hyperactivity that is also highly sensitive, a bit stormy, and completely brilliant. Textures are extremely important, as Branch casually uses reverb to widen and deepen the landscape, or as in perfectly placed overdubs – like the dubs of Tomeka Reid's cello on “theme 001,” which build tension and add richness to the mix. Of course, before you can play with texture you have to have the goods – and with the lock-in-groove between Reid, bassist Jason Ajemian, and drummer Chad Taylor, the goods are definitely in supply. Then there's Branch herself. She plays the trumpet with skill and purpose, and her approach is both passionate and cerebral. No note is wasted. She knows what to do with every bit of space. I think her days of being a ridiculously underrated musician will be officially over once this record takes off. And there is every reason to expect that it will.

A real standout track is “leaves of glass,” on which Branch is joined by guests Josh Berman and Ben Lamar Gay on cornets. The opening chords are almost unbearably mournful and gorgeous, then the mix goes crazy as the horns start melting all over themselves in multiple washes of echoey effects. This track is followed by “the storm,” where things really get surreal as Reid and Ajemian make rain and Taylor thunders. Branch provides the lightning. Then echoed brass ghosts dance on the plains as the storm passes overhead.

The record is definitely a suite. Branch seems to turn over ideas until every workable outcome has been been revealed, and a suite is the perfect outlet for her writing and arranging methods. And for as much of a Chicago-comes-to-NYC vibe the group presents, I'm reminded as often of big open Midwestern spaces like Kansas or Nebraska – and even the Southwest. Seriously, it sits nicely as a companion piece to Jimmy Giuffre's Western Suite or Neil Young's Zuma.

I have to talk about the magnificent “theme nothing.” Taylor wallops out a horse clomping rhythm that indicates we may be headed toward the Southwest. Ajemian's bass rumble propels the music forward. The way Branch and Reid wind around each other is spellbinding. The melody will stay in your head forever – and not in an annoying way. I think it's my favorite track of 2017 so far.

And then there's the oddity at the end, which is called “...back at the ranch,” Guest musician Matt Schneider plays a freestyle campfire acoustic guitar for a minute and a half. It doesn't sound like a tag to me, although the liner notes call it an epilogue. It sounds simply like we have arrived at a new and different place where anything is possible. So is it jazz? The only answer to that question is “Who gives a shit?”

Saw the core quartet playing extended selections from this less than a month ago. Went into the concert not knowing what to expect and left feeling very impressed. Everything worked very well and that evening will stay with me for a long time.

Thanks for the review. Listened on Bandcamp. Buying this one today.

"back at the ranch" is a reference to the house of a particular music patron in West Columbia, South Carolina. Yes, it is where a lot of magic has transpired and the homebase (south of the border) for so many Chicago/New York players.