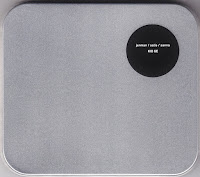 These short pieces offer abstract atmospheres that do not rely on any pulse, suggestive in their inventive, mosly organic sounds, and surprisingly characterized with strong storytelling qualities. Jerman, Salis, and Sanna know how to develop tension and sketch a dramatic texture with only homemade objects such as metal lids, brass bowl and brushes, creating a ritualistic ambience that balances between sudden radio waves noises and static silence or devling deeply into the sounds of skins and wooden objects.

Patiently, the three musicians experiment with a richer palette of sounds and delicate, cryptic textures. The later improvisations suggest some strangely beautiful moments when the prepared instruments, extended bowing techniques, and various field recordings lead to an exploration of new, imaginary sonic environments. Some of these otherworldly sonic environments are even charged with an exceptional urgency and a sense of disturbing playfulness. The last improvisation is the most radical one. It re-contextualize cheery Far-Eastern voices and a brief song in a chilly, distant drone.