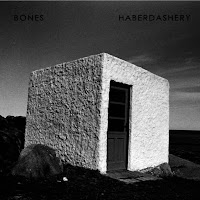 
Taubenfeld is the leader of the trio, credited as the main composer and also the producer of this recording from the Amsterdam club Bimhuis in October 2016. His compositions contain hints of chamber, haunted atmospheres, and contemplative moods, based more on loose, fragmented ideas than on coherent narratives. Maybe this is the reason why the album is dedicated to those who “surrender to the mystery and follow their hearts”.

Bones offer much more than intimate, abstract mysteries though. The strength of this trio has always been the immediate, intuitive connection between all three musicians, the democratic, balanced, and spacious interplay and the manner that all can weave and color patiently - in a “Snail’s Pace” as the first piece is titled - separately and collectively, a nuanced, profound textures out of a simple chord or even a sound. These qualities only grew stronger and deeper since the trio released its self-titled album last year, and followed the release with several European tours.

Haberdashery sounds like a series of free-associative, labyrinthine walks where you keep crossing and exchanging sonic reflections of your own and your associates. Only “No Name Letters” suggests some degree of rhythmic playfulness that may be associated with jazz. The last piece, “Cello” is the most impressive one here. A quiet meditation on delicate, fleeting sounds - whispers and breaths, distant, ringing bells and deep-tones arco touches.