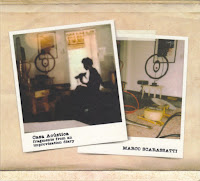 Marco Scarassatti is a Brazilian sound artist and improviser who is active in both European and South American circles. Casa Acústica (Acoustic House) literally refers to his home, most specifically a music room. He writes, “Between the years of 2014 and 2016 I maintained a regular routine of daily improvisations using objects, conventional musical instruments, as well as instruments invented by myself. This daily gesture coincided with the desire to register these improvisations in the form of a diary.

“During this time, approximately 100 hours of improvisation were recorded, which reveal aspects of this daily gesture, in the form of snapshots: listening to the environment, choosing the instruments, microphone positioning within the context of improvisational performance.

“The spontaneous visits and meetings of fellow musicians were also an integral part of the recordings; and an important characteristic of the diaries is that they reflect the daily occurences and events that happened to parallel them, such as the improvisation on the day of Ornette Coleman’s death.”

Eventually Scarassatti sent 18 tracks to fellow Brazilian musician Henrique Iwao, who made the final cut, resulting in the eight pieces that make up the hour-long Casa Acústica: fragments from an improvisation diary.

Listening repeatedly to Casa Acústica, one senses keenly that these excerpts were not chosen because they are particularly spectacular, but rather because they are somehow generally representative of what occurs in the original 100 hours. This is not a criticism of what’s here, but a commendation, for what the document presents has an extraordinary naturalness, both an immediacy and a lack of artifice. For various reasons, including the sense of actually sharing space, I seem to have spent far more time with it than I would usually spend with a recording, recalling repeatedly listening to John Cage’s Variations IV (Everest) virtually as background music fifty years ago.

This morning I put it on again, a moment later I was involved in a conversation, and as the first track began, I thought the distant barking dogs were the newly arrived dogs of a recently returned neighbor. As one goes through the cycle of these excerpted pieces there are episodes that reveal Scarassatti’s different activities and instruments. He is interested, for example, in simple home-made instruments (Walter Smetak, a Swiss composer who lived in Brazil, is an inspiration), including trumpets constructed of mouthpieces, hoses and bell-like objects that are used for both blowing and tapping, evident in the opening “Breath” as well as other pieces. Scarassatti also plays the viola de cocho, a three-fretted Brazilian folk instrument, with a cellist’s virtuosity, mixing plucked runs with percussive taps. An extended baritone saxophone solo recorded on the day of Ornette Coleman’s death reveals a range of delicate, airy and obscure sounds that one would rarely assign to the instrument.

The range of Scarassatti’s explorations becomes evident with the sheer mystery of a track like “How to walk around a house blindfolded,” in which the musician’s percussion performance foreshadows our own disconnect from the visual world in our experience of the CD, drawn at once to two sonic worlds, the improvised and the environmental. Other pieces are duets in which he uses assorted sound sources with violinist Guilherme Antonio or shares various instruments with Mateus Dantas. A “subdued” violo de cocho—evidently struck—accompanies a “background mass,” along with what seems like a truck, suggesting Cage’s germane question: “What’s more musical: a truck driving past a music school or a truck driving by a factory?” The final track, “Decomposing panning – panning for gold, marble ball and interference noise” is a complex of liquid sounds and resonant, flexing metal, as well as struck and scraping sounds.

What is most beautiful about this documentation is that Scarassatti’s improvisations become inseparable from the sonic texture of life itself. His combination of spontaneity, chance, homemade instruments and the home environment ultimately open the process to the sounds and the experiential rhythms of the listener’s world, the tapping keys of my computer keyboard themselves seeming to join with that concluding metal pan.