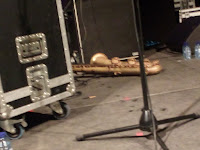 I had the chance to attend the final days of Sonic City Festival in Kortrijk, Belgium this past month. The festival itself went from Friday to Sunday and was curated by Thurston Moore.

As you might expect when hearing this name, the line-up was quite diverse.

My train was late so I missed the first half of the first act. Which was sad because it was Keji Heino with Teun Verbruggen & Jozef Dumoulin. The part of the set I had the chance to hear and see was full of energy. The drums were at full speed, Heino was going crazy on his guitar and the keyboard and electronics joined them eagerly. Then, Heino started to sing or shout or tell something. With all the words he uses his voice to me is just another instrument he uses quite elaborately. In all his collaborations, I like these parts a lot and on Sunday it was no exception. This trio was his trio. He conducted Verbruggen and Dumoulin and showed them with his hands what he expected of them.

A fine beginning for a fine day.

The next interesting show came from two guys I never heard of before: Dennis Tyfus and Cameron Jamie. Together with Cary Loren the form the trio Cannibal. On Sunday it was only the two of them but it was a fantastic intense show nonetheless. Their set took only 20 minutes but the people around me seemed to be either awestruck or annoyed, which I think is a good place to be in for improvised music. They built their sound with their voices and several electronic devices, for example the smartphone of Cameron Jamie. Great!

The next act was The Ex and I have to admit that I didn't expect much. But they were suprisingly good. The sound and the songs were tight and they seemed to enjoy themselves.

The next artists are well know to be difficult and their shows and sound to be hard to swallow.

The New Blockaders brought an old piano, an old record player and a concret mixer on stage. And they filled the room with an almost hurting wall of sound. Through the show the destroyed the record player and, of course, the piano. But how often can you destroy a piano as an act of no-art? Richard Rupenus and Philip Rupenus walked the stage under their ski caps as if they were lost. The whole show didn't quite resonate for me at all. They seemed to be bored while they destroyed the piano and so was I.

Moor Mother was something completley different!

Camae Ayewa, performing under the alias Moor Mother, from Philadelphia had all the intensity The New Blockaders lacked. The set was a mixture of Spoken Word, Hip Hop, Electro-Noise and some other genres I have no name for. But it wasn't the genre that made the set so interesting, at least not that alone. It was the presence and intensity of Moor Mother. The first minutes I thought she will just play some songs and sounds out of her laptop to get the show done. But over the course of the next minutes and the rest of the show she filled the whole room with her sheer power and underneath the music here message was very clear. This is probably the source of her anger and power: The discrimination of people of color and of women in America and around the world. I have to admit this show blew my mind.

The next trio was one of the reasons I made my way to Belgium: Stephen O'Mallev, Thurston Moore, and Mats Gustafsson.

They started off with Gustafsson on electronics and the two guitars adding a few feedback sounds. But all in all it didn't take long till we all got what we expected a fierce wall of sound. After they built that wall I had to retreat in the back area of the room because in the front their was no distinction possible of the different sources of sound. I blame that on the venue.

In the back the sound was better and I enjoyed the noise I signed up for by attending the show. But I have to admit, though I am a huge fan of Mats Gustafsson's style of playing the reeds, this set was better with him on electronics.

The saxophone couldn't keep up with the two guitars. All he did or could do was "utter" a few "statements" with long and fighting high tones. The duo of Thurston Moore and Mats Gustafsson is capable of more diverse sets as you can hear on Live at Henie Onstad Kunstsenter.

The next set was the second reason I made the trip and it was worth every minute of the ride: Joe McPhee with DKV-Trio.

It was pure joy to see and hear them play. On their faces and in the music was a lightness and a joy that infected the whole room. I can only guess that the audience wasn't an explicit jazz audience (at one point in the set I was not sure who ended the improvisation, McPhee or the audience because the rock-educated listeners thought it was over and started to clap.) But Vandermark, Drake, Kessler and McPhee took the room by storm. The improvisations were rather short and full of little melodic parts. Hamid Drake gave the set the groove. It was a great pleasure to listen to these four excellent musicians in such a good mood.

I guess the last act "This is not This Heat" was also worth a listen but I left the venue smiling and full of nice impressions.
Paul on Tuesday, November 28, 2017
Share