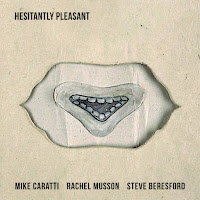 
A saxophone crackles and yelps in short breaths. Unusual sounds are found within the womb of a piano, its strings assaulted and ground by fingers and gizmos. In the opposite corner of the soundscape, drums are similarly, cleverly mistreated, producing scratchy and tingly noises. These are the first few shambolic yet unnervingly appealing minutes of Hesitantly Pleasant during which the players establish rules of communication. The album, a collection of seven freely improvised pieces, was recorded live at The Vortex in London in January 2017 and documents the meeting of British improvising stalwart, pianist Steve Beresford, and two younger voices: UK saxophonist Rachel Musson and Aussie drummer Mike Caratti.

The introductory, eponymous track soon rises from this spasmodic exchange and gains body while traversing into an urgent colloquy, only to melt into the first of a number of brooding and wistful patterns led by Musson’s crooning saxophone. Even if one comes to expect for the opening piece to set the stage and narrative for the rest of the record, Hesitantly Pleasant remains an utterly elusive conundrum with many different threads striking through its existence. Take the two subsequent cuts, for example. “Complex Footwork and Violent Movement”, as suggested by the title, is aggressive and surprisingly concrete. As Musson’s sax twinkles nervously, Beresford plays spastic but firm chords, stroking and striking the piano keys, while Caratti’s drums rumble deeply and rhythmically, dancing in vertigo-inducing motion.

The spontaneous composition breaks suddenly and morphs into the gentle, ballad-like “A Unique Haircut”. Here Musson blows long, sustained tones, revealing her lyricism and love for faux bluesy licks. Similarly, Beresford entertains a delicate melody while the percussion is restrained and minimal, reduced to rustles and hushes. While the tune gains in tempo when Musson returns to more abstract figures, screeches and blurts, “A Unique Haircut” remains an almost melodious post-bop tune.

Meanwhile, the three central tracks, “Geel”, “Psychic Fair”, and “Still Horrible” create a triptych for themselves as cohesive interplays make way for antagonistic counterplays, and calmer bopish phrases are drowned within energetic click-clack exchanges. The ability of the trio to switch from loud, brash clashes to playful, zesty bridges reveals a deep chemistry.

The album is closed by the quirkiest of quirky tracks. On “Nunc Pro Tunc”, Beresford reaches for his electronic effects, turning the cut into a psychedelic and abstract electroacoustic affair. The song is populated by subdued silhouettes of sounds, synthetically generated tones, and random thuds. Even Musson’s always bustling lyricism is completely obliterated here. Having lived with the record for a while, “Nunc Pro Tunc” remains the most complex and puzzling, yet most rewarding of the seven pieces on the record. A compelling tune that closes an equally compelling record.