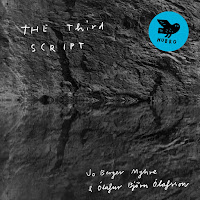 “The little indicates much.”
— Shams of Tabrīzī

Had Mewlānā Jalāl ad-Dīn Muhammad Balkhi never met Shams al-Din Tabrīzī on 15 November 1244, he might have remained a teacher and jurist of some talent and intellect, but afterward, he abandoned his books and was transformed forever into Rūmī, the Sufi mystic poet whose esoteric hymns reverberate across time and across cultures, inspiring even those who have never whirled like a dervish.

Rumi and Shams shared a wisdom beyond the ken of both the unlearned and the learned. What each had sought on his own, and in the company of other seekers, was only to be found by their finding each other: each was a student; each a master. Together, they heard a music too profound for ordinary ears and spoke of it in an ineffable language. Shams claimed that as a result of their encounter, Rumi’s poems were afterwards written in three scripts, and that he, in fact, was the final, impenetrable one:

The Third Script is also the title of an album by the duo of Jo Berger Myhre (from Norway, on bass and electronics) and Ólafur Björn Ólafsson (from Iceland, on drums and keyboards). The sessions between these two, in an abandoned Reykjavík warehouse-turned-studio, has produced music of some profundity. Their music unfolds as if across forbidding, untrod glacial landscapes. It takes its time as it takes on the vast scale of time, reveling in ambient stretches of mutating drones.

The Third Script contains four tracks and spans a mere 39 minutes, but each of those minutes opens onto eternities of thought. Myhre and Ólafsson handle time like true mystics. This is meditative music, if by “meditative” one means an activation of the imagination, a synesthesia where hearing becomes seeing and seeing becomes thinking and thinking stops calculating and starts contemplating itself and its world.

The first track, “1000%,” is the only “composed” song on The Third Script. Myhre’s bass enters the static with some echoey, divebombing arco—a resonate Arctic roar. Ólafsson rattles a shaker, pounds a snare, and follows Myhre’s bass notes on the keys. Suspense and tension mount as a trinity of pipe organ chords repeat against a horizon of sweeping smears of electronica, as if unto infinity, but there is nothing anxious here. The song builds with deliberation, patiently aching toward a little lyrical melody that is as beautiful as it is haunting.

All three of the other tracks are improvised. The title song, “The Third Script,” begins with Myhre’s dry arco—every horse hair on his bow sounding hoarse as a foghorn bellowing over the icy waves of Ólafsson’s undulating, slowly modulating organ. They seem to capture the tempo of the essence of time, which Shams of Tabriz explains like this:


The world does not move through time as if it were a straight line, proceeding from the past to the future. Instead time moves through and within us, in endless spirals. Eternity does not mean infinite time, but simply timelessness. If you want to experience eternal illumination, put the past and the future out of your mind and remain within the present moment.

And one does feel wonderfully adrift in the endless spirals of the timeless present when listening to “The Third Script.” The song gives voice to something lonely, mournful. Myhre’s bass snorts like a beast, then howls like a troubled mind possessed by expansive thoughts. This is the sort of dissonance one hopes never resolves into anything fathomable.

Myhre and Ólafsson continue to develop ruminative moods and spaces on the final two tracks, “Orifice” and “Ravening.” “Orifice” emphasizes the angle of Myhre’s bowing as he shapes mammoth arcs, dragging woodsy notes out of the deep barrel of his bass. Electronic oscillations transform into Ólafsson’s regular rhythm on the drums. An almost garrulous bass arco and the riding and splashing of cymbals compete with a machine hum, reminding us that “orifice” can indicate abyssal depths—chasms, fissures, clefts. And the title of the final track, “Ravening,” leads one to imagine what it feels like to be rapacious, voracious, ferocious. Myhre fiddles and bows on top of some droning overdubbed legato and staccato strokes, pacing and growling like Rilke’s panther staring through the bars of Ólafsson’s chiming notes.

To call The Third Script “ambient” or “drone” or “electronica” or “post-rock” or “jazz” is to diminish this stunning music that defies marketing distinctions. Out of the encounter of Jo Berger Myhre and Ólafur Björn Ólafsson, an astounding music has emerged that flows into the swirl of time. Before they met, both Rumi and Shams thought they understood what could not be understood, yet after meeting, they understood something beyond even that. Perhaps something similar has occurred with this duo of Myhre and Ólafsson. Listen to The Third Script without preconceptions. Be open to its queries. It will astound. “Instead of resisting changes, surrender,” Shams of Tabriz advises; “Let life be with you, not against you. If you think ‘My life will be upside-down,’ don’t worry. How do you know that upside down is not better than right-side-up?”

Listen to, and please purchase, the album, here:
http://hubromusic.com/jo-berger-myhre-olafur-bjorn-olafsson-the-third-script/

The song “1000%” is included on the edition of the Nordic Playlist curated by Sigur Ros:
https://jajajamusic.com/playlists/nordic-playlist-113-sigur-ros/
Paul on Thursday, December 14, 2017
Share