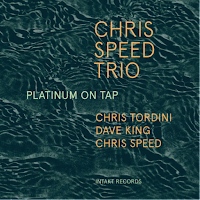 There’s no questioning saxophonist/clarinetist Chris Speed’s value as a sideman: in the last few years alone, he’s made essential contributions in support of many of the leading lights in today’s creative jazz scene. Records like Matt Mitchell’s Vista Accumulation, Michael Formanek’s The Distance , or most recently, Craig Taborn’s Daylight Ghosts wouldn’t be the same without Speed’s distinctive combination of melodic subtlety and carefully-crafted precision. But Speed has made less of a mark when it comes to his own projects. That may be changing, though: starting with 2014’s Really Ok (on his own Skirl Records imprint), Speed seems to be putting more of an emphasis on realizing his own vision, and using a sax-bass-drums trio format to do it. This is a particularly demanding context for a horn player, of course, as the heavy lifting is invariably going to fall on the saxophonist’s shoulders, even when the other components of the trio are top-shelf.

And Speed’s colleagues here are indeed top-shelf, with bassist Chris Tordini and drummer Dave King not only his original bandmates on Really Ok but also folks he worked with on Taborn’s Daylight Ghosts (King) and Mitchell’s Vista Accumulation (Tordini). These are players who know each other exceptionally well, and they have every reason to be able to forge a synergy that will pay rich dividends. It also seems evident that Speed sees this as an opportunity to make a major statement, not only about his technical skills as a saxophonist but in relation to the jazz tradition as a whole: while most of the record’s ten tracks are Speed’s own compositions, the two covers (Albert Ayler’s “Spirits” and Hoagy Carmichael’s “Stardust”) seem strategically selected to draw our focus to the sweeping expanse of the history of this music, thereby allowing Speed to make a unique contribution to it. There are thus some pretty hefty expectations that accompany this music. Does it fulfill them?

Yes and no. There’s an undeniable chemistry between the three musicians, and when they bear down on a groove, as happens especially on hard-driving tracks like “Arrival High” or “Crossface Cradle,” the King-Tordini axis is perfect in catalyzing, sustaining and commenting upon Speed’s extensive skeins of notes, and the energy the three generate is addictive. Speed covers a lot of ground with a tenacious intensity on the freewheeling “Crooked Teeth,” and King too seems especially inspired here, with lots of fluidity and multiple directions he follows in conversation with the others. Even on a less ostentatious track like “Pretty Much,” Speed offers probing phrases that create interest through their imaginative tuneful and rhythmic explorations, while Tordini and King generate a steady swinging tempo that avoids becoming static or monotonous.

But it’s not a flawless record, something that becomes particularly apparent on the covers. On an old standard like “Stardust,” there’s nowhere to hide for a tenor saxophonist in this trio format, and Speed’s delivery and ideas are somewhat lackluster. It’s not a throwaway track, coming in at five and a half minutes, but there’s simply not enough melodic invention or passion there to make it work. The same can be said, perhaps more surprisingly, for Ayler’s “Spirits,” where despite the spark that the trio produces, Speed seems to be going through the motions. It doesn’t help that the track is the shortest on the record at under three minutes—not enough time for the three to dig in and inhabit it fully. It ends just as Speed seems to be starting to catch fire, actually.

Part of the problem may be due to the recording itself, which on some of the tracks places a kind of veil over Speed: he’s too far receded in the mix. Given that Speed’s tone tends to be on the arid side to begin with, he needed to be much more forward in the recording—especially given that it’s his date.

These quibbles aside, this remains a worthwhile addition to Speed’s catalog. In some respects, lofty expectations may themselves be partially to blame for the music’s occasional shortcomings, as the potential here was sky-high. Perhaps the third time around will truly be the charm for this group.
Paul on Sunday, January 28, 2018
Share