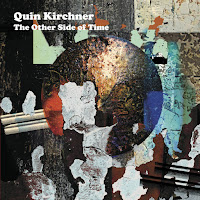 The Other Side of Time is the first album to be released by Chicago based percussionist Quin Kirchner. The album features a top notch band with Nick Broste on trombone, Nate Lepine on flute and tenor saxophone, Jason Stein on bass clarinet, and Matt Ulery on bass. The album is comprised of roughly half original tunes by Kirchner and half covers of music by Sun Ra, Charles Mingus, Andrew Hill, Arthur Verocai, Paul Motian, and Kelan Phil Cohran. The Other Side of Time is a long album, with fifteen tracks spread over almost ninety minutes.

The covers mostly work very well, capturing the spirit of the originals through solid arrangements and burning solos. Stein’s bass clarinet solo on Sun Ra’s “Brainville” is on point. “Mumbo Jumbo” functions as a lovely tribute to the late Paul Motian. The final cut is a beautiful reading of the Charles Mingus classic “Self-Portrait in Three Colors” which, like the original, is basically just a straight reading of the melody. “Karina” is a fascinating cover of Brazilian composer Arthur Verocai’s original and provides a nice counterpoint to the mostly bebop fair on the rest of the album. Cohran’s “Armageddon” is the most free tune on the album, as one would probably expect.

The only cover that doesn’t work for me is the mashup of Andrew Hill’s “Limbo” with “The Shoes of the Fisherman’s Wife Are Some Jive Ass Slippers” by Charles Mingus. The arrangement of “Limbo” is on point, the solos from Broste and Lepine are excellent, but the Mingus theme feels tacked on and is not developed past a slow statement of the melody that builds beautifully but then ends rather abruptly. The relationship between the two themes isn’t explored in anyway which seems to be a lost opportunity.

Kirchner’s originals fit in very well with the covers. The opener “Ritual” is a nice invocation to set up the album. “Resounder” is a fierce three minutes of solo explorations from Kirchner. “Drums & Tines Parts 1 & 2” and “Ripple” are also all solo Kirchner tracks. “Flutter” is a gorgeous duet for percussion and bass clarinet. “Wondrous Eyes” is a lovely slow sizzle of a tune. “Together We Can Explore the Furthest Beyond” is a nice ballad where the band is joined by Ben Boye on piano.

The album is basically straight ahead modern bebop and works quite well. The arrangements are tight and well performed. The solos are consistently interesting. If you’re a fan of a hot band playing modern bebop, and I imagine many of the readers of this blog are, The Other Side of Time is worth a listen. A solid first album from Kirchner, I look forward to hearing what he does as a leader in the future.