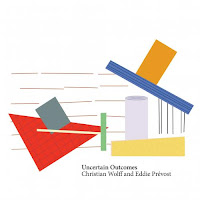 All music challenges the relevance of written response (whether by its simultaneity of effects or its heartless invitation to a certain in-built will to verbal description, a kind of failed translation worse than Google), but few musics challenge articulate response with quite the same perfection achieved by drummer Eddie Prévost and much of the work with which he’s associated and which appears with some regularity on Matchless Recordings.

Prévost emerged over fifty years ago as a member of AMM with the composer Cornelius Cardew, the guitarist Keith Rowe and the recently deceased saxophonist Lou Gare, an original and unfortunately underknown musician. Since then Prévost has been both the singular constant in AMM (though Rowe and pianist John Tilbury have each been members for decades, some overlapping) and the keeper of Matchless, both AMM’s outlet and that of its closely allied developments—other bands, workshops, a certain set of approaches to improvisation--in which Prévost has been deeply involved. He would have done a valuable service to improvised music if he were responsible only for recording the French band Hubbub and the brilliant English saxophonist Seymour Wright, but he has done far more. He represents a major and demanding wing of improvised music.

This music is relatively easy to listen to, but description is challenging: it’s always the same and yet always different; it’s frequently refined, spare and extended, to the extent that a certain compulsively structural listening and a critical verbalization disappear as the music slowly unfolds, leaving in their place a serene experience of spontaneously evolving music, the materiality of sound and exchange, that is diminished by the self-consciousness of verbal response. When it is briefly perceivable as hasty and harsh, its messages are just as rich and profound. All of this is only heightened by the quality and depth of Prévost’s own commentary on the music and its social and philosophical resonances, beginning with his book No Sound Is Innocent: AMM and the Practice of Self-Invention: Meta-musical Narratives (Copula, 1995) and continuing to the “musician’s note” that accompanies Uncertain Outcomes, an essay that explores “experimental improvisation” from the early work of John Cage and AMM’s work with Cardew, the specific entry points respectively of Christian Wolff, who plays piano here, and Prévost himself.

The set documents two concerts. CD1, recorded at Iklectik in London in September 2015, is in two parts, 37 and 18 minutes in length; CD2, recorded at Dartmouth College in New Hampshire, in July 2016 is a singular 50-minute piece. Each musician restricts himself to a relative narrow palate. Prévost uses a bass drum as both drum and resonator and explores bowing and scraping cymbals for sustained metallic sounds, with very rare eruptions of multiple sounds. Wolff plays piano with even greater delicacy, from isolated sustained tones, alternated intervals, subtle use of plucked strings and minimal preparation and an occasional brief melodic figure. A keyboard wind instrument, perhaps a melodica, arises brieflyin both concerts.

In the longer first segment of the concert at Iklectic, the resonant musings of one musician summon and enfold the response of the other. There’s a kind of microscopic grandeur at work here, little sonic events assuming a scale based on the attention they demand. Fairly modest bursts of activity (a gong, a splashed cluster, an ascending series of dissonant intervals), however, are sufficiently foregrounded to take on a mysterious drama. The second, relatively brief piece is initially more animated, with Prévost generating a greater range of sounds; midway through, it sounds like the instruments are being played by a strong breeze. These are fleeting impressions. The work’s on-going shape is a diagram of flux. Nothing is predictable, yet everything is sustained.

The Dartmouth performance has a greater resemblance to dialogue, with each individual gesture triggering a distinct reaction from the other musician, gradually evolving responsorial patterns. A brief prepared piano utterance gives rise to the sustained sound of bowed metal; a scraped cymbal suddenly gives direct rise to a piano chord. Our ability to describe it is brutally simplistic. The music is not. Every sound, every second, every silence is nuanced, subtle, telling, resonant with something like consciousness.

The upshot of listening and reflecting on Uncertain Outcomes is that I emerge feeling better for the listening and with less to say than I began, something oddly akin to reaching the end of David Markson’s The Last Novel, but cheerful rather than despairing, liberated from language rather than buried by it.
Paul on Thursday, January 25, 2018
Share

Wow, how did I miss this one? Sounds great, appreciate the review.

If language were liquid, it would be rushing in. Instead here we are in a silence more eloquent than any word could ever be. -Suzanne Vega