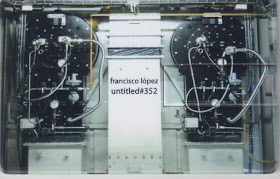 Untitled #352 was created from original environmental sound matter recorded at the Régie de Chauffage Urbain / RCU (urban boiler plant facility) in Fontenay-sous Bois, near Paris. The album has two independent sections: the MANTRAcks and the soundtrack to the audio-only installation-performance project Exposure by Anne Collod. First, I will discuss the MANTRAcks.

There are 10 MANTRAcks, and each runs for exactly half an hour. They are all long drones, constructed from the earlier mentioned boiler plant recordings, layered and mutated. The tracks all have 2-minute fade-ins, 3-minute fade-outs, and no other progression. Simply put, these are 10 of the most meticulously and masterfully built electronic drones I've ever heard. Since the music never moves, it takes on the qualities of a wall of sound, or rather, a painting. It becomes the listener's duty to focus on the individual layers, textures and sounds, which is not at all dissimilar to a viewer attempting to take in a painting. The liner notes highly recommend dedicated listening with headphones, and this reviewer strongly agrees – there are so many intricacies and nuances happening all along the tracks' dynamic ranges that half of the album's appeal may be lost under poor listening conditions. It's no coincidence that the album was released exclusively as a USB with lossless files, as it makes listening under different conditions more difficult.

I mentioned the dynamic ranges of the MANTRAcks, and they're likely the most perplexing thing about these pieces. The different tracks all experiment with frequencies, including several layers of extremely limited frequencies. Taking a peak at the spectrograms is truly an odd experience for this album. Where the first track looks relatively full, with a thick cluster in the high and very low areas, the last track has nothing more than a soft cluster in the very high end and a thick cluster in the very low. I earlier compared these tracks to paintings – perhaps these bizarre spectrograms are what he is painting? There is a sense of progression when one scrolls through the ten spectrograms: clusters move up and down, empty sections appear and expand, patterns emerge. The patterns are potentially coincidental, due to the tracks following similar ideas and experiments, but occurrences such as how the top of MANTRAck 10's spectrogram nearly perfectly match the bottom of MANTRAck 09 feel too good to be coincidental, adding a level of conceptuality to the pieces.

Even free of the conceptuality and technical jargon, the MANTRAcks work wonderfully on an emotional level, recalling why they're called MANTRAcks (López calls them extensive electric mantras, actually) in the first place. At their hearts, the MANTRAcks are really just a series of related long-form mood pieces. It can be interesting to investigate the layers and mixing of the pieces, but I believe that the true purpose of the pieces is to have the listeners lay back with their headphones on, close their eyes and fade out – turning off the body, and letting the brain roam free. Much like the words of a mantra, the sounds of a MANTRAck mean nothing – there is no poetic or emotional core, no concept or allegory which demands thought. The tracks are just raw, stagnant sound, in its most personal state, allowing listeners to simply interact with the sound without bothering with the complexities of the music. A mantra is bound to resonate with different people differently, creating different mental and emotional responses, but I've found all 10 pieces to be effective in slightly different ways. When looking at the tracks in this way, 10 30-minute tracks no longer seems so crazy – it's just 10 separate possibilities for aural meditation.

Up next is Soundtrack 'Exposure', a massive departure from the MANTRAcks. Although placed at the end of the album, this was actually the first creation to come from the boiler plant recordings. As earlier stated, the piece is the "audio-only installation-performance soundtrack" of the choreographic project Exposure by Anne Collod. It was premiered for blindfolded audiences at the boiler plant facility in 2017. It is also stated that this version of the track is actually a stereo mixdown of the original 46-channel piece. I couldn't find any English resources on the project so I don't completely understand it, sadly, but that's hardly important for enjoying the piece – and the piece is incredibly enjoyable.

The recordings are actually considerably less modified and mutated than they are on the MANTRAcks, although the music itself is far more complex. But as with many of López's pieces, the magic comes from the track's unorthodox and subtle progression. The track starts off quite a bit busier than Francisco López fans are likely used to – with the sounds of processes switching on and off. It is likely the sounds of pistons or pressure being released, but it sounds like little more than penetrating jabs of white noise. It builds and builds, layers add and amplify, until we're at what's essentially a constant white noise drone. It continues to grow and feels absolutely massive – like an all-encompassing sound mass which perfectly covers the entire frequency range. After 6 minutes it stops building, even dropping a prominent low-end layer to focus on the stunning high-end buzzes, but the dB level continues to grow until the 8-minute park – nearly half of the piece is complete. This first half, in my opinion, is incredible. López has written many pieces with long building drones which leads to sudden cuts, but this is different. It starts out innocuous and simple, even rhythmic. But, that sense of rhythm begins to fade away and it builds into something bizarre and terrifying. It becomes hard to imagine how much further it can go, but it just keeps on building. The climax of this build is some of the most affective music López has ever constructed.

After the cut, the piece makes a sharp term towards nuanced simplicity. A single quiet layer (what sounds to be a single layer, that is) of snaps, crackles and pops persists for several minutes, before transferring into some low-end bubbling which maintains the soft and momentary nature of the previous sound. Several annoying and high-pitched buzzes gradually join the mix and begin to harmonize, one after another, and before the listener knows it they're back in López's aural maelstrom which is more confusing and off-putting than before. Perhaps this moment's frustrating ambiguous nature is meant to directly conflict with the emotional simplicity and easy effectiveness of the drone which opened the piece. Soon enough, no individual layers can be heard and the piece is once again little more than a massive white noise. In the last three minutes of the piece, López begins to pick off the low-end layers, turning the noise into a high-pitch harmony which itself fades into nothingness, bringing the piece to an end.

It's wonderful. It's slow, nuanced and provocative. It's uncompromising in its avant-garde nature, but it works to elicit a direct emotional response from the listener (which of course is quite ambiguous). Even though it's only 20 minutes long, it feels just as large in scope as his hour-long pieces. It's said that the piece was debuted with 46 channels to a blindfolded audience – what an amazing experience that must have been! I am often critical of soundtracks, but I think that due to the different nature of the soundtrack (being to an audio-only installation-performance) it makes for perfectly fine at-home listening, over speakers or headphones (although López strongly recommends headphone listening for the MANTRAcks, he says nothing about the soundtrack).

Untitled #352 comes in two sections, and they are both massive successes. Although one section is 15x larger than the other, they each exist independently and are absolutely essential. The pieces all work well on their own, and can constitute as 11 separate listening experiences (as the artist likely intended), but they work quite well in sequence as well – the MANTRAcks create different emotional atmospheres which can be felt like drifting moods when heard in sequence, also allowing the listener to pay attention to the conceptual nature of the filtered sounds, and the soundtrack works as a wonderful grand finale to the evening. López's ideas and compositions are great here, but to add to it, he's picked fantastic source materials as well. The boiler plant is full of mechanical life; there are so many isolated and nuanced sounds, all finely tuned for non-musical purposes. Every sound is full of purpose, stemming from meticulously engineered machines, when in nature and performance one would likely mistake them for accidental. When wonderful source material meets wonderful ideas and masterful sound editing, something special occurs – and something special has occurred on Untitled #352.
Paul on Friday, January 26, 2018
Share

Here a reader from Murcia, Spain!
See this http://sonm.es/