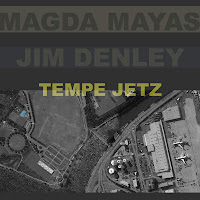 Berlin based pianist Madga Mayas takes the concept of prepared piano seriously. I have seen her in concert a few times and I cannot recall her sitting at the keyboard and playing, rather there have been implements and attachments applied to it and she is pulling sound from them. Jim Denley, whom I have not seen play, is an Australia based saxophonist, flautist, and composer. Together on Tempe Jetz, they combine their energies to create a haunting ephemeral work.

Though the title refers to an artists space within an abandoned sports club in Sydney, it is located next to an airport, and the track titles seem to reference a journey, and what I would assume is an international flight ('A Departure', 'Customs Declaration', 'In Transit', and 'Arrival'). For me, when I fly, my goal is to will myself into a state of suspended animation. The thought of being fully awake through TSA lines, waiting at gates, and shoehorning oneself into a tiny seat on a stuffed plane is just too much. The parallel that I draw is that the music on Tempe Jetz is a perfect soundtrack for shutting the outside off and listening closely to an inner world.

The music works at nearly a subliminal level, and it seems that playing a barely functional clavinet is nearly dreamlike in its own right as Mayas turns this intentional instrument choice into an impressive array of sounds. Luxuriating in these textures, pulses, and reverberations, she presents to Denley a open palette for his own textural, pulsating, and breathy sounds. Mixed in are field recordings as well, adding a little extra color to the tones being reciprocated between Mayas and Denley.


For an album referencing travel, there is actually very little in grand movements, rather the sounds are small, quiet, and plentiful. Towards the end of the third track, 'In Transit', fittingly, tempo and volume increase, but soon dissipate. However, the effect is to draw you in closer, make you hear the key clicks, string scrapes, and eventually end up on a very different type of journey. Quite lovely in an unexpected way.
Paul on Wednesday, January 24, 2018
Share