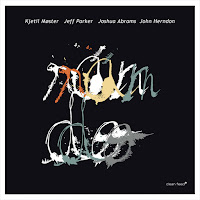 You’ve really got to hand it to Clean Feed, at a time when many other record labels are on the verge of existence or are cutting back on the amount of yearly releases, Clean Feed (and a few others like them) are still continuing to not only put out a great amount of music each year, but are also ensuring the quality and interest of the music that they decide to release.

Having been a Tortoise fan in my earlier years I was interested to see that two members (Jeff Parker, guitar, and John Herndon, drums) of that old post-rock group were together in the line-up of this recent Clean Feed release, alongside the saxophonist Kjetil Møster, with Joshua Abrams on bass rounding out the quartet. On first listen it was refreshing to note that there were no nods to their past or inappropriate post-rockisms being forced into the improvisational context, and the music came across as being fresh and in the moment. This is not to say that the music doesn’t sit comfortably within a free improvisational/jazz aesthetic, as the structures and sounds used are clearly of that ilk, but it has been done without a rehashing of old forms that offer nothing but a nostalgic trip down memory lane.

As group interaction goes this particular recording offers the listener a collective experience, with the musicians at times resisting archetypal predispositions and musical roles, instead preferring to mine the seam of equality, which produces a rich tapestry of sounds and textures without any one sound dominating for more than necessary within the musical flow. ‘Anicca’, the longest track on the album, illustrates this beautifully, where the flux of sounds change over time from a European sounding improv opening to a bass and drum groove, to a balladesque form for sax and guitar, which builds slightly into a more agitated setting before an arrhythmic, subtle, and ethereal ending. It’s not surprising to find that it’s garnished with a fitting title - Anicca being the Buddhist doctrine of impermanence. ‘Dig Me Out’ also provides us with an egalitarian form in a freely improvised setting, as does the shortest track ‘Island Life’ with its reflective bowed double bass melodies.

The album is book-ended by ‘Orko’ and ‘Pajama Jazz’ where the bass and drums, provide a more traditional role in that of the rhythm section, particularly in the latter, with Parker on the guitar also providing a harmonic backing whilst Møster’s sax doodles and sketches out an array of subtle and understated shapes.

Ran Do is a refreshing album that sits well within the historical canon of improvised music, it provides us with a music that is made up of coalescing sounds which overall create a resonant wholeness.
Paul on Tuesday, January 23, 2018
Share