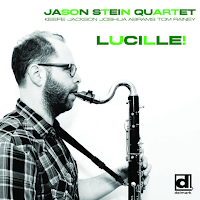 The second release from bass clarinetist Jason Stein’s quartet, Lucille!, features more of the band’s “cool school” influences from Warne Marsh and Lennie Tristano, along with some Monk, Parker, and a couple pieces composed by Stein.  With tenorist/contrabass clarinetist Keefe Jackson and bassist Joshua Abrams making return appearances after their involvement on the group’s first release, 2011’s The Story This Time, the newcomer this time is drummer Tom Rainey, who takes over for Frank Rosaly.

Marsh’s “Marshmallow” leads off the album, the group charging through the tune’s complex head with panache, then segueing into a superb solo from Stein, soon joined by Jackson on tenor for some terrific dialogue.  The intuitive conversational rapport between the two horn players is one of the album’s strengths: their overlapping, sympathetic lines always tease out new dimensions of each tune.  Although the Marsh/Tristano approach can sometimes be a bit emotionally detached and excessively mannered, the group generally manages to avoid these pitfalls, with a good deal of energy fueling Tristano’s “Wow” and “April,” the former with some excellent upper-register playing by Jackson to complement Stein’s leaps and scurries, and the latter with Rainey playing a key role in providing some crucial rhythmic fluidity.  The Monk (“Little Rootie Tootie”) and Parker (“Dexterity”) renditions are similarly engaging, with Jackson’s shift to contrabass clarinet on “Dexterity” perhaps a hair less compelling due to the deeper sonority of the instrument; the extra low end doesn’t work quite as effectively as Jackson’s tenor when it comes to maintaining the optimal tonal balance in the group.

As good as the covers are, in some ways it’s Stein’s own material that is the highlight of the album, because the looser structure of the pieces really allows the players to stretch out, putting a premium on their interactive capacities.  At almost eight minutes the longest of the record’s nine cuts, “Halls and Rooms” possesses a winding, meandering quality that gives Rainey full rein in guiding the proceedings with a variety of rhythms that alternately expand and contract, while “I Knew You Were” is a mysterious piece that utilizes Abrams’s fine arco playing to sustain an eerie and captivating mood.  These tracks also bring Abrams more directly into the mix, enhancing the quartet’s collective power; on some of the other pieces Abrams’s bass is sometimes hard to hear.

With more of Stein’s trademark mastery of his instrument and some fine contributions from his colleagues, this entry in Stein’s quartet catalog is a fine one, showcasing not only the quartet’s respectful but creative re-invigoration of the older repertoire but also Stein’s acumen as a composer and arranger.