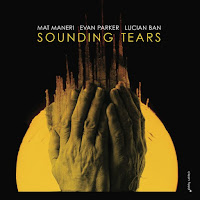 This album has been flying a little under my radar for quite some time. Actually I don't really know how I really came across it. But after listening to it two or three times it grew to one of the best albums from 2017.

Mat Maneri and Lucian Ban have been working together for almost ten years. Presenting their 2013 record Transylvanian Concert they invited Evan Parker to join them for a concert on a release show, and the trio was born (for more history, check the Clean Feed website). I don't want to say that the history of the trio isn't interesting or that it doesn't leave an imprint on their sound, but I didn't know the history when I first came across Sounding Tears and the knowledge of their development as a trio did not impact my perception of the music, and this is what I want to write about, the music.

The first track is the very short 'Blue Light' which starts with Evan Parker on the sax. He plays a melody with a certain sadness in it. Then Mat Maneri joins him with some string-picking until at the end when Lucian Ban adds a few notes from his piano. After a minute and a half the track is over. Though it is short the piece sets the tone for the album, there is a slight sadness in the melodies and the tunes. Perhaps the word melancholy fits better.

The second track 'Da da Da' opens with all three players at once. Maneri offers long streaks on the viola, perfectly accompanied by Parker's sax. Ban takes over some kind of leading role without subduing the others. Within the track the leading role moves from one to the other as the trio moves along in a slowly intensifying manner, ending in a polyphonic "moaning" after a bit more than seven minutes.

Maybe it is the sound of Maneri's viola that carries the melancholic vibes throughout the album. But in my listening the melodies, the interplay and also the polyphonic parts carry that sadness with them. The title also indicates this mood.

'Blessed', the fourth track on the album, starts with Ban playing single tones on the piano with a lot of time to breath in between. My musical knowledge is not developed enough to state as a matter of fact that he plays the tones of a minor chord, but my experience is developed enough to hear the minor sound in the sound. This goes on with Maneri and Parker joining in. This may be the slowest track on the album but with this said I also can say that it fits in perfectly.

On 'Sounding', Ban grounds the music on a groove, an almost minimalist pattern he repeats on the piano without losing the overall mood of the album.

I don't want to repeat myself over and over again. This album sits in a place not a lot of albums I have heard until now sit. In the middle of improvised and composed music. In the wonderful interplay of three gifted musicians, they create a melancholic atmosphere I enjoy listening to. I enjoy feeling while I'm listening to this album.

Years ago I heard someone describe the music of a band called Tindersticks as "the sunny side of sadness". Transfered to the world and sound of free jazz and improvised music this might be the perfect description for Sounding Tears. The perfect album for the darker time of the year.

Here you can find some excerpts from the album: