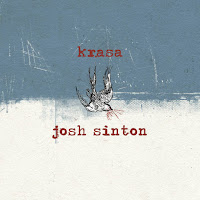 When International Anthem released John McCowen’s Solo Contra in early December 2017, no one would have been blamed for assuming it was the only new solo contrabass clarinet album we’d be hearing for a while. And yet just weeks later came Josh Sinton’s krasa, on Jon Irabagon’s Irabbagast label. The stubborn expectation that their both being solo contrabass clarinet albums means they should be similar, though, comes more from the relative rarity of the featured instrument than from any fundamental overlap between the way the two musicians approach their project. In contrast to McCowen’s slender disc of streamlined acoustic drones, Sinton offers a (relatively) sprawling set of improvisations that ranges a territory both familiar in places and—more often—utterly alien.

Sinton front-loads the album with its longest track, the 16-minute monster “Sound.” It’s not what you’d call a hospitable gesture, but then again just because this might be your first exposure to the contrabass clarinet doesn’t mean the album is an introduction to the instrument. (It’s decidedly not.) In fact, without any contextual information, there’s a chance you could get through the whole of “Sound” under the mistaken assumption that you were hearing—what, a guitar? “Electronics”? An archaic machine doing some kind of grimy but vital work? Like saxophonist Matt Nelson and the rest of the GRID trio on their self-titled debut, Sinton (with the help of a few well-chosen tools and effects) pushes his instrument far outside the realm of reasonable expectation, somehow prompting us to split our attention between the end result of the music and the means, one moment looking beyond the contrabass clarinet altogether, the next seeing the instrument in a new light.

This can be something of a difficult—some might say tense, even painful—experience. As Sinton tests his instrument, he tests us, too. “And,” for example, sets up a relatively stable drone that’s ruptured two minutes in by a sudden snarl, after which tortured wails, squawks, and pops dominate the piece. With “Heard,” the album ends on almost ten minutes of temperamental distortion and vein-snapping strain. It’s tracks like “{prelude to),” taking a more or less recognizable approach to the clarinet, that throw the rest into relief. What ties it all together is the underlying human quality Sinton manages to draw out of his playing on krasa, whether he’s working in a conventional mode or fraying sonic boundaries. As mechanical and unearthly as the music can sound, it never comes across as anything less than living: Hear him on “Felt” sucking sharp air to recharge—or on “Sound” or “(now}” infusing the instrument with an unmistakably vocal character. While the words may be impossible to discern, they’re not meaningless: They express a terrible sense of desperation and struggle.

The album’s title is likewise ambiguous but evocative. Does it refer to a Czech word for “beauty”? Does it refer to the Czech composer Hans Krasa, who was murdered by Nazis in 1944? Or does it refer to something else altogether? Sinton draws mixed resonances together without resolving them, leaving the sounds that result more felt than heard.