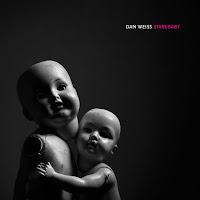 Starebaby was born from NYC drummer Dan Weiss' desire to play a bit harder than usual. Weiss's recent recordings include Sixteen: Drummer's Suite and Fourteen, both in the modern jazz vein. However, a fan of metal growing up, here Weiss explores a jazz aesthetic informed by heavy grooves, crunchy guitar, searing synthesizer, and a fine layer of electronics.

Joining Weiss is guitarist Ben Monder who contributes great rock infused lines that reminds me of moments from his mid-90s work Dust. On electric bass is Trevor Dunn, who has no trouble delivering on the metal side. The keyboard and piano work is handled by Matt Mitchell and Craig Taborn who are both known for their acoustic piano work along with more experimental electronics. So, with such a team, Weiss' music features both the heaviness he was seeking and the melodic inventiveness that one would expect from such heavy hitters.

The first track, 'A Punchers Chance', starts with the time honored traditions of a classical-like guitar intro that morphs quickly into a thick and throbbing groove. Each time I hear it, I think this could be from some ideal more nuanced version of King Crimson. The chords progressions play off dissonances, leading the listener through what amounts to a punchy fanfare. Next up, 'Depredation' begins with an insistent, but not straight forward, beat laced with atmospheric electronics. When Monder appears, his twisted arpeggios tear holes in the dark fabric and the two keyboards engage in a macabre dance. 'Annica' is a change of pace - it's a slow dirge that builds on menace as much as it slowly builds off a repeated refrain. About two-thirds in, the pieces seem to come together and the music becomes denser, though the actual melody stays oblique.


What began as strong album, ends even stronger. The quick four minute 'Veiled' begins with a convoluted electronic melody coupled with a sparse one from the piano. As the piece progresses guitar, piano, drums and electronics pass around deliberate phrases, which sets the mood for the final track. 'Episode 8' begins with a drum solo, leading to a passage featuring solid ring modulated electronic piano - surely a classic jazz-rock sound. Monder teases with a little Terje Rypdal-like 'over the fjords' soaring. Then, things get really heavy as Dunn's bass lines twist around the electronic keyboards and they all tumble into a prog metal epic. It pounds, it punches, it sounds dangerous, and its a hell of a lot of fun.

I know that many fans of experimental music began their journey far out on the metal/noise spectrum, this album just may be able to push some listeners the other direction.