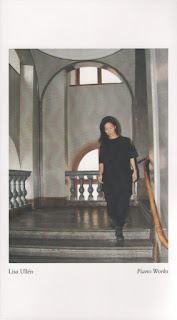 Composer and pianist Lisa Ullén is well known to a lot of FJB readers. Her work with Anna Högberg and with Nina de Heney and Charlotte Hug is among the most recent, and very celebrated, releases reviewed here. Her duo setting with Nina de Heney goes back to around 2008, and under the name Nuiversum – and in a trio setting with vocalist Mariam Wallentin – they earned themselves a five star review. Furthermore the first release from the quartet Festen is highly recommended. Lisa is also running her own label; Disorder as well as being a very vital part of the Swedish impro scene not only as an artist but also as a curator. All in all there’s a lot to listen to when it comes to Ullén.

Here we, finally, get to hear Ullén on solo piano and prepared piano! And it’s no less than three CD’s of solo piano. It’s a luxurious treat that spans over one hour and forty minutes. Ullén has created an intimate, introspective but also a curious journey and I find myself listening as mesmerized, especially during the last CD, in which the six tracks; Hollow 1 through 6, takes me further and further into the most inner space of Ulléns mind. There’s a delicate touch to every single note and I’m convinced that Ullén wants me to focus intensively on everything that’s happening from the moment the note is released until it reaches my brain.

I’m almost a bit surprised that I would get so lost in a peeled off solo piano album. 100 minutes just disappears and I kind of wonder what happened. But as I listen again and again, I also begin to hear how Ullén explores different emotions. There’s a humoresque touch in ‘the place’ and in ‘layer’ Ullén challenges me with a vibrating prepared piano in a 4-minute excursion far from what I’m used to hearing from a solo piano performance.

The ‘Hollow’ suite on the last CD is an absolute beauty which would stand up well on its own.