The Latest from Paal Nilssen-Love

Norwegian drummer Paal Nilssen-Love is, no doubt, one of the hardest working musicians in our galaxy. He always pushes his boundaries, as well the ones of his musical comrades, plays with extremes, but never forgets the great fun that music, especially live one, is. His latest releases on his own label PNL, including the 4oth one with an extended version of his Large Unit, prove it. 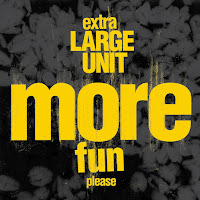 Nilssen-Love never had a musical comfort zone and never subscribed to any genre or style. His work embraces not only free jazz and free-improvisation but also electronics and noise, Ethiopian and Brazilian music and elements of contemporary, avant-garde music. In 2015 he was commissioned by the Norwegian Ny Musikk organization to compose a piece for the Oslo Sinfonietta. Nilssen-Love offered to write a piece for an extended version of his Large Unit, hosting young students from the Norwegian Academy of Music.

More Fun, Please - featuring eight musicians from the Large Unit plus twenty ‘Intuitive People’, aka the young students - is, like any project that Nilssen-Love is involved with, a work that searches for extremes - loud and silent, fast and slow, with a strong physical presence, but a joyful one. More Fun, Please uses a complex graphic score, still, demands personal initiatives; employs two conductors, except Nilssen-Love himself, with signs that indicate instructions in the form of political statements, drawings of ghosts, Pac Man and other humorous references. The three pianists and their grand pianos were seated back to back, as a piano triangle at the center of the stage, and the Extra
Large Unit were placed between and around the pianos, so all can see each other.

More Fun, Please, was performed, so far, only once at the Only Connect festival in Oslo in May 2017. A casual listener, who does know a thing about this composition, may find it hard to believe that this is indeed a work of Nilssen-Love. A first impression may suggest that it does not sound like anything that he has done before, but on repeated listening you may recognize some key elements of his work. Not only the irresistible dynamics and the driving rhythmic patterns, but also the playful clashes of sounds, the absurdist-surrealist sense of humor or the way that the most extreme and dissonant sounds eventually gravitate into a playful storm of boundless energy. This 33-minutes piece flows organically from one sonic event to another. Full of sonic inventions and eccentric surprises; flirting one minute with Feldman-esue meditative minimalism and on another with Mingus-ian, engaging free improvisation; moving freely between intricate orchestral segments to intense, chaotic eruptions; quoting ideas from Norwegian and Irish folk music, nuevo-tango of Astor Piazzolla; touching strange, disturbing noises and concluded with a poetic, repeated statement of violinist Torfinn Hofstad. Just imagine a session of Nino Rota, Cecil Taylor and a Korean royal and you may begin to understand the great fun potential of this piece. 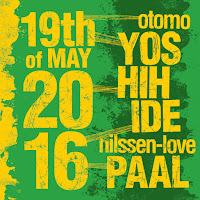 This live recording from the the Dom Cultural Center in Moscow in May 2016 also plays with extremes, but more familiar ones, ones that are identified with these two master improvisers. This is the second recorded duo of Yoshihide and Nilssen-Love after a self-titled one (Jvtlandt, 2014), but Yoshihide collaborated before with The Thing (Shinjuku Crawl, Smalltown Superjazz, 2009); the two recorded in a trio with Norwegian noise master Lasse Marhaug (the vinyl-only Explosion Course, Pica Disk/PNL, 2013) and Yoshihide guested in the Chicago Tentet’s Concert for Fukushima (Trost, 2013).

Yoshihide, unlike other guitarists that Nilssen-Love have been collaborating with as Terrie Ex and Arto Lindsay, is a master of textures, often thorny and noisy, but always detailed and captiving ones. On the first piece, “Cat”, Yoshihide sketches different ideas, searches for shifting outlines, tones and dynamics and explores sonic collisions before settling on a texture that keeps its high intensity even on its most quiet and sparse moments. Nilssen-Love deepens the sense of restless urgency with manic, constant-shifting rhythmic patterns, some are even delicate ones when he employs ringing bells and other percussive devices that resonate beautifully Yoshihide’s rough, metallic tones. The second, longer piece, “Dog” begins with another intense texture. Yoshihide and Nilssen-Love build dense and fast tsunamis of sounds but suddenly opt for a gentle, atmospheric texture. Then, the distant, effects-laden guitar lines of Yoshihide create a web of distorted tones, overtones and rough noises. Nilssen-Love reflects later on Yoshihide solo with his own exploration of his drums set sonic range, first the qualities of drums and their skins and later focusing on the his cymbals, suggesting metallic waves that trigger Yoshihide to comment on these sounds. Eventually both build another series of tsunamis of sounds, only now these tsunamis are even more massive.