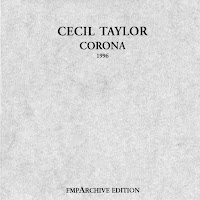 When Cecil Taylor shifted his musical focus to Europe in the late 1980s, one reason was to look for new drummers. For his month-long stay in Berlin in 1988, Taylor played duos with Han Bennink, Günter “Baby“ Sommer, Louis Moholo, Paul Lovens and Tony Oxley, a varied collection of percussionists, and with the exception of Moholo, very different to Taylor’s former drummers, Sunny Murray and Andrew Cyrille. Prior to this concert at the Total Music Meeting in Berlin in November 1996, Taylor had only played with Murray on a handful of occasions since 1964, most recently as part of Taylor’s trio in May that year, and this was to be their last performance together.

Taylor and Murray first met in a West Village coffee-house in the early 1960s. Both had the reputation of being musical mavericks. Taylor had already freed himself from harmonic restraints and Murray had been developing an open-ended drumming concept, a revolutionary approach to rhythm at that time. With him the drum kit started to be a collection of instruments, each having a different sound function. Murray’s aim was to free the soloist completely from the restriction of time and to this end he set up an unending hailstorm of percussion relying heavily on continuous ringing stick work on the edge of the cymbals, an irregular staccato barrage on the snare, spasmodic bass drum punctuations and constant, but not metronomic, use of the hi-hat, as Val Wilmer has noted in As Serious As Your Life. Murray was shifting pulses rather than specific rhythms. The effect was that he created a netting behind Taylor’s piano, enabling him to move wherever he wanted. Murray stated that his rhythmical role with Taylor accelerated the increasing comprehensibility of the pianist’s music, and he played with him in the years during which it reached maturity.

On Corona you can feel this connection again. The album is divided into three sectors, in the center there’s an almost 50-minute piece by Taylor on piano and voice and Murray on drums. “Sector 1“ and “Sector 3“ serve as initiation and coda (something Taylor was especially fond of at that time) with the help of the voices of Dominic Duval, Tristan Honsinger, Jeff Hoyer, Chris Jonas, Jackson Krall, Elliott Levin, Chris Matthay, and Harri Sjöström, based on Taylor’s enigmatic poetry. The whole performance is thus given a sort of ritualistic character. As to the central piece, the European influence on Taylor‘s playing is obvious. In general, the piece gets its charm from the clash of this “new“ Taylor with Murray’s traditional free jazz drumming. Taylor isn’t interested in finding some sort of synthesis here, but rather in sifting out conceptual and structural parallels. At the beginning he concentrates on staccato runs in the lower registers, like a predator circling his prey. Murray throws in a lot of his characteristic cymbal and snare work, the bass drum is restricted to abrupt interjections, leaving a lot of open space for the piano. Yet this is just a prelude for the second part, in which Taylor pulls out all the stops: lickety-split runs, highly energetic playing, the acceleration and retardation compressing and stretching time. Murray responds with a much greater focus on toms, bass drum and snare, with a more compelling drive. Both musicians create strong tension and motion, by giving the individual lines a certain independence and direction. The last part of the piece is like a trial of strength between the drums and the piano, with Murray increasing volume and stamina (which can be heard between the 28- and 33-minute-mark). Both combine, in the words of Ekkehard Jost: “…. the parameters of time, intensity and pitch, thereby creating a new musical quality, energy” (an aspect Colin also mentioned in yesterday’s review). Here energy is created by a constant change of the pulse, explosive outbursts, the shifting of accents, alternation between crescendos and decrescendos, and the intensification of tempos and volume. All in all, it’s a fascinating performance referencing Taylor’s and Murray’s roots but seeing them from a new perspective.

Listen to Corona on Bandcamp: 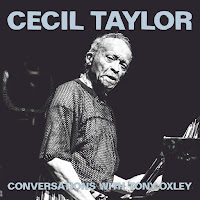 Still, the more convincing of these two new releases is the concert with Tony Oxley. Taylor said that Oxley‘s playing excited him like no drummer since Sunny Murray, perhaps even more so. His shift to a more European sound first became evident in his choice of Oxley as his drummer for the Feel Trio. In the late 80s and early 90s he became Taylor’s preferred drummer and - after a break - this continued until his death. They performed in Taylor’s last official recording Ailanthus / Altissima: Bilateral Dimensions Of 2 Root Songs , and when he toured Europe, it was often with Oxley as a duo (I saw them twice, in Moers in 2008 and in Neuburg/Donau in 2011). This album was recorded at the Chamber Music Hall of the Berlin Philharmonic in February, 2008.

Taylor was attracted to Oxley’s playing because of his unique sound, centered on a selection of different cymbals. His more fine-grained approach combined with Taylor’s supersonic technique resembles a musical shower of shooting stars. Oxley uses a highly original drum set consisting of regular (but higher pitched) drums and cymbals to create “intricate soundscapes” giving the music more of a vertical than horizontal sound. Taylor’s choice of Oxley also tells us much about Taylor’s musical philosophy since 1988. Oxley’s aesthetic is based more on modernist classical timbres than Sunny Murray’s, whose style is - in spite of his free approach - still rooted in a jazz tradition. Oxley’s background puts him closer to the percussive works of Edgar Varèse, particularly with his complex and imaginative micro-divisions. Taylor’s playing has almost always had a strict on-the-spot, definite, forward-looking phrasing, and by choosing Oxley he became the connection between modern jazz/blues and European classical traditions.

All this can be heard on Conversations with Tony Oxley. Again, Taylor uses small riffs which he reconstructs and expands, processed in his runs and shifting them to different registers. In the second part of the piece there are many staccato chords, again the basis for the development of certain riffs, but now more aggressive, and as they escalate the typical clusters come into play. Taylor needs some time before he reaches full intensity but as soon as he’s there he’s able to keep the improvisation at an incredible level. Yet there’s also a softness, a more romantic side to his playing that became more pronounced since playing with Oxley, especially towards the end of his life. On this album Oxley foils Taylor’s runs and staccato chords with short drum rolls, but when it comes to dynamics he follows the pianist’s guidelines. Oxley dances around Taylor’s clusters tenderly and puts them even more to the center, cutting through them at once. Especially in the more intense parts of the piece, Oxley uses his whole lower array of plastic, woodblocks, mutant cowbells, little bongos, the snare drum and the hi-pitched toms, creating a metallic mist and symphony of crispy clicking, a poetic and subtle means of communication. As to volume, Oxley is a more subdued drummer when he plays with Taylor (unlike Murray), but his timing is excellent, knowing when to set priorities without pushing himself to the fore. In this performance as elsewhere they are complimentary, which is why their cooperation worked over so many years. Their music is about the exchange of cultural experiences and the sensitivity of sound – different musical languages, but mutually inspiring. Oxley often anticipates what Taylor plans (particularly as to dynamics) and is able to react immediately. Kaja Draksler has noted that Taylor’s “sensibility in terms of dynamics is an important aspect of his playing. By using its extremes within a split second, he is creating rhythmic illusions and simultaneously unfolding a vast color palette”. No other drummer except Tony Oxley was able to match that range in such a sympathetic way.

The album is available through Instantjazz.com.
Stef on Sunday, August 26, 2018
Share