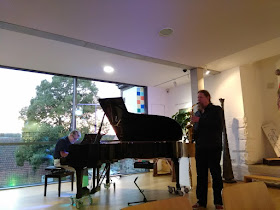 You really cannot ask for a more serene setting than the Kunststation Kleinsassan, a small art museum nestled in the Rhön mountains of central Germany. Against the setting sun outside the panoramic windows of the cafe, pianist Alexander von Schlippenbach and saxophonist Frank Paul Schubert performed two intimate sets of music to a captivated audience.

The first set was mostly centered around the music of Thelonious Monk - one of Schlippenbach's specialties. Rarely stepping too far outside the lines, the duo followed the tunes' familiar contours and twisting passages. It was a nice warm up set demonstrating the great rapport between the musicians. The second set however began on a much different note - or rather a swift swat of the inside of the grand piano's strings, followed by a series of sustained multi-phonic tones from the sax. Free and floating, the duo stayed in the mode for 10 minutes before picking up the tempo and finding some new places to explore. Schlippenbach's dissonant tonal clusters rang out clear, crisp, while Schubert played up and down the octaves, often pushing at the edges of his soprano sax. The musicians stretched out and let go of the more obvious musical structures. Suggesting, mimicking, and prodding, the music ascended past the known, braving the thorns and thistles while still maintaining the warmth exuded in the first set.

The concert was organized by the group Jazzfreunde of Fulda.