Swedish, Ethiopian-born, Oslo-based vocal artist Sofia Jernberg needs no introduction. She calls herself a “maker of things” and she keeps doing a lot of beautiful things with Mats Gustafsson’s Fire! Orchestra, and countless free-improvisations meetings. She also did many interesting things with the Swedish-American Seval, with cellist Fred Lonberg-Holm, and the Swedish-Norwegian-French quartet The New Songs. Jernberg continues to make exciting things with Gustafsson’s new group The End, and with the Norwegian experimental Lana Trio. 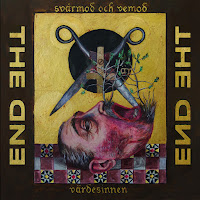 Take two of the wildest baritone sax heavyweights on our planet - Swedish Mats Gustafsson and Norwegian Kjetil Møster (whose resume spans from modern jazz groups as The Core and Trinity, through punk-jazz Ultralyd and Møster! to glam-rockers King Midas and Datarock); add the adventurous, avant-rocker, Deerhoof’s powerhouse drummer Greg Saunier (who enjoys improvising with guitarist Mary Halvorson and trumpeter Stephanie Richards) and throw into the mix Norwegian avant-noise-metal guitarist Anders Hana (from local groups MoHa!, Ultralyd and, Noxagt), who returned to musical activity after a seven-year sabbatical, and you already have enough ingredients for a super-exciting group, one that can reach apocalyptic climaxes in an instant. Still, the secret ingredient of this new group is Jernberg. Her strong presence seals the masculine maelstroms of fiery jazz, art rock, noise and poetic texts with a much needed feminine quality and emotional authority.

This potent dream team recorded its debut album, Svårmod Och Vemod Är Värdesinnen (in Swedish: dark melancholy and sadness are senses to be valued. This gory, suggestive titled is emphasized with the cover art by Edward Jarvis) in January 2018 in Bergen, Norway, after only three performances. Needless to say, the joint forces of Gustafsson and Møster with the baritone guitar of Hana and the propulsive drumming of Saunier promise raw, low-end onslaughts and boundless energy. Jernberg’s delivery - at times capricious, freewheeling wailing and on other times her one-of-a-kind singing-whispering-reciting charge the explosive mix with an urgent, even rebellious message of The End.

The album opens with two short pieces by Gustafsson and Hana. “Svårmod” offers everything you can expect from such group. Hana’s distorted-dirty, chainsaw guitar is in the center, embraced by the intense, baritone attacks of Gustafsson and Møster and the manic drumming of Saunier, while Jernberg screaming over this primordial lava. “Vemod” revolves around Hana’s hypnotic riff, that sound like a twisting West-African rhythmic rhythmic pattern with something catchy from the Captain Beefheart songbook, but already brings Jernberg wordless wailing to the center.

Møster’s brief interlude “Rich and Poor” serves as an introduction to his song “Both Sides Out”, a kind of requiem to post-Trump America that can be experienced psychoanalytic attempt to release the many demons from this tyrant’s deranged psyche. Jernberg continues to perform her shamanic duties, this time as an equal partner of The End’s brutal and terrifying cleansing ritual. 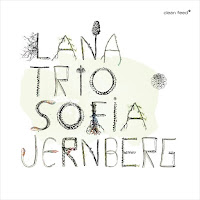 The experimental Norwegian Lana Trio - trombonist Henrik Munkeby Nørstebø, pianist Kjetil Jerve, and drummer Andreas Wildhagen, was formed in 2007. The trio managed to solidify in its first two albums a delicate balance between its intense, powerful interplay, an uncompromising search for new sounds and dynamics and a strong affinity for open-ended, non-idiomatic improvisations. Jernberg joined the trio for its third album, recorded on March 2016 in Halden, Norway, and performs now again with the trio after the release of the album.

Jernberg sounds as if she has been free-improvising with Lana Trio for ages. She fits organically in the wild yet loose chaos that Lana Trio keeps producing. But her operatic-eccentric delivery charges the focused interplay of the trio with an engaging, emotional depth/ Jernberg vocalizes wordless, seductive suggestions and uses her voice as an intriguing, subversive instrument.

Jernberg connection with Munkeby Nørstebø - who works with another experimental vocal artist, Audrey Chen, in the Beam Splitter - is almost telepathic. Both sound as have perfected their own imaginative, cryptic language. Wildhagen embraces these secretive talks with sudden, rhythmic eruptions while Jerve frames all with minimalist, percussive piano playing.

Each of the four free-improvised pieces focuses on a distinct strategy. The first one, “Ears Anciens”, is restless and urgent; the second, “Omnivore's Aperitif”, is enigmatic, sparse and surprisingly quiet; the third, “Ghost Training”, explodes with fiery flow of volcanic energy ; the fourth, “Solitude Chant”, concludes this wild ride with a mysterious, tempting ritual.
Paul on Wednesday, August 08, 2018
Share