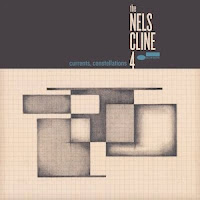 It’s great to see an album such as this being released on such an esteemed and historically rich label. Nels Cline’s previous album Lovers had been his debut on Blue Note, but Currents, Constellations isn’t the safer bet of Lovers mood music, with a two guitar front line (Nels Cline & Julian Lage) creating some edgy and driven pieces, whilst being creatively supported by Tom Rainey’s drumming, and Scott Colley’s bass. This quartet romps through eight pieces, all themes written by Nels Cline except the Carla Bley penned ‘Temporarily’. When Nels Cline played with Julian Lage on their duo album Room, he felt that he had been kicked-up the backside by the playing technique of the younger guitarist, who in his formative years had been a child prodigy on the instrument. However, that didn’t seem to come across in the music on that album and once again the two guitarists seem to blend well and compliment each others playing on Currents, Constellations. Apparently when expanding what they did as a duo into a group setting Julian Lage had remarked that he had ‘found his people’, which bodes well for the creativity and hopefully the longevity of this band.

With an opening chord, and a skittering of drums the album’s off into the first track ‘Furtive’, Lage & Cline immediately weaving their parts around one another’s, the theme of the piece being more like a central magnet that pulls all the exploratory playing together, the melody only featuring twice, once in the middle and again at the end. ‘Swing Ghost ‘59’, starts with it’s interesting syncopated melody before opening up in the middle of the piece, with some understated and more searching ideas being explored before the introduction of a very slinky and cheeky melody, which has Julian Lage written all over it, before returning to some of the initial material to end. ‘Imperfect 10’, starts with a great harmonised melody, which isn’t a million miles away from having a fusion feel to it and is much more through-composed than the previous two pieces. ‘As Close As That’ has a divine lazy feel to it, which creates a sad but beautiful atmosphere, and is followed by ‘Amenette’, which flits between the busy up-tempo theme, and the freer episodes that follow, which contains some interesting and playful deconstruction of the initial material. Carla Bley’s ‘Temporarily’, originally written for the Jimmy Giuffre 3, of which her husband (Paul Bley) was pianist at the time, is rendered by this group in a very accomplished way, and blends in with the structured explorations of the rest of the album after the gorgeous theme. ‘River Mouth (Parts 1 & 2)’, is aptly titled, and conjures up images of the Ganges, with its raga-like melodies in the second part of the piece before the album comes to a close on ‘For Each, A Flower’, a short reflective piece, which reaffirms much of the delicacy of the playing on this album despite the more robust and edgy themes that come in and out of focus on Currents, Constellations.

For those thinking that this is just another guitar album, think again, there is much intricate playing on this album and the musicianship is second to none. It isn’t your usual dual guitar frontline twanging it out with each other, and for anyone even remotely familiar with either Nels Cline’s or Julian Lage’s work it’s no surprise that this set of pieces is well thought out and diligently executed, making it a delight to listen to.