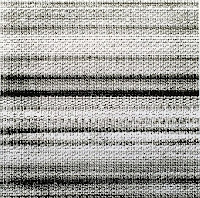 Originally released in January of this year on Open Mouth, this untitled Relative Pitch reissue finds Nace in collaboration with New York polymath Samara Lubelski on violin. Apart from her solo work and recent duo efforts with guitarist Marcia Bassett, Lubelski is an established recording engineer and collaborator. Working with artists such as Thurston Moore, Jackie-O-Motherfucker, MV & EE, and Double Leopards she has been force in the experimental music scene of the Northeast US since the early 90’s.

In contrast to the turbulence of Live at Dreamland, this offering could be depicted as a pulsating mist of near static incandescent vapor. ‘Spiral Reflector’ starts things off with Lubelski’s briskly bowed violin drone taking the fore, backed by Nace’s subtle volume swells and amplifier manipulation. ‘Mazed’ finds the duo further probing at the veil. The modulated drones interweave in an unsteady interplay of dipping intonation that is both fascinating and disorienting. In ‘Re/Fract/Ed’ Nace provides a subtle underpinning of persistent tremolo to Lubelski’s gruff and swirling hum. Their interplay is intimate and understated; as if any distinct deviation might spook whatever specter they’ve conjured. ‘Sides’ is the longest track on the release and begins with Nace’s prickly guitar scrapings that quickly dim once the violin reemerges. The duo then tucks into a long sustained cloud of subdued and concentrated improvisation, their intertwined airs colliding and hissing moderated overtones. The last cut ‘Then/Then Not’ begins with a base of heavy guitar tremolo, over which Lubelski threads her wailing strings. It serves as a parting signal as the mist disappears over the horizon, leaving the listener bleary with a distinct mental residue.