Guitarist and singer-songwriter Wendy Eisenberg makes quite a statement with these two 2018 albums. It's not surprising that they're as good as they are, her playing on Birthing Hips’ 2017 album Urge to Merge is fantastic; at once melodic, prickly, and virtuosic. These albums showcase two sides of this multifaceted artist's music; her solo acoustic-electric material, where she chases her muse in a very personal, idiosyncratic guitar language, and in a trio with Trevor Dunn and Ches Smith where her playing style is utilized to dual with these sonic titans in an absolute blast furnace of an album. And though the style of the albums differs wildly, there is a continuity in her playing across both sets that works whether she's plucking out angular acoustic shapes or laying down fuzz bombs. 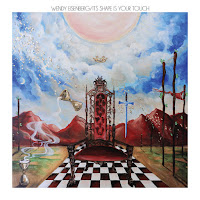 The album begins softly with 'Sol Lewitt', in which softly plucked strings tangle with muted, percussive pops and bent harmonics. She weaves folk and free improvisation in a continuous flow of ideas, though more heavily leveled towards the latter in this track. In 'Lethe' she lets the folk elements emerge and evolve. It begins abstractly before she settles into a fingerpicked melody that evokes a journey down the song’s namesake river; discomposing but still peculiarly comforting. ' Early November' is a clinic of melodic ideas and guitar technique. Eisenberg’s mastery of manual dexterity is apparent, as fingerpicked passages are interlaced with quick runs of trills, harmonics, and hammer-ons. She moves from one musical idea to the next, each evolving from the previous so naturally that it’s hard to discern the chicken from the egg. It sounds to me like 'Eridanos' is pocked with very slight nods to Spanish guitar and flamenco that have been mixed into her sound concoction. 'The Designated Mourner' would almost fit in on an old Takoma release (I’m sure Fahey would’ve loved this album). It has a rolling, narrative feel emanated by many of those artists but all filtered through Eisenberg’s incongruous, constantly probing style. 'Sawn' begins with a barely discernable figure scraped out of her guitar before some warm chords. The song is very hypomanic, exhibiting several creative flights and variations before returning to the subdued attack of the opening. 'All Saints' recalls for me the early work of guitarist/composer Bjørn Fongaard in its use of pointillist microtones and harmonics. Its penetratingly investigative approach explores the spaces between semitones with enthusiasm and serves as a final statement from a most satisfying album.

Eisenberg’s acoustic work brings another name to mind of course, that being the late, great Derek Bailey. It’s almost unavoidable that his name will pop in your head the moment you hear a false note or harmonic being thrown in the mix, but Eisenberg’s music has a more narrative feel compared with Bailey (or even Tashi Dorji’s acoustic material as a more recent comparison). Another name that I’ll mention, although sadly much less well known, is that of the late New Zealand guitarist Donald McPherson who informed his free improvisations with the essence of classical and folk (or perhaps vice versa). All of these comparisons however fail to capture the scope of her unique talent and are ultimately due to me trying to reconcile this brilliant album with something that I am familiar with, as ultimately her music may have its allusions but it’s uniquely her own. 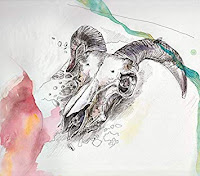 The Machinic Unconscious finds Eisenberg teamed up with longtime John Zorn collaborators Trevor Dunn on bass and Ches Smith on percussion. Mr. Dunn is well known to the Collective, whether from his Mr. Bungle/Fantomas/Tomahawk fame, or his work with John Zorn. The same goes for Ches Smith who played skins on an album that showed up in almost all of the Collective’s Top 10 lists in 2018. Besides that he’s played so many projects in 2018 alone that it would be difficult to list them all, but they include contributions to records from Mary Halvorson’s Sextet, Marc Ribot’s Ceramic Dog, Matt Mitchell’s debut, Tim Berne’s Snakeoil, as well as being a longtime collaborator of Trevor Dunn’s in Trio-Convulsant and Secret Chiefs. Dunn and Smith are both accomplished and well-practiced free improvisers and provide the perfect foil for Eisenberg on this recording.

'The Descent of Alette' begins with Dunn’s bass growling with fuzz and peeling off squeals and chirps into which Eisenberg and Smith dimly venture, Eisenberg with clean lines glossed at times with ring modulation and Smith with a light crackling attack, like a kindling fire. The piece varies in intensity several times tricking you into thinking that kindling will take off and leave this one blazing, but it never does, and remains a fragmented and probing affair throughout. 'Depths of Locusts' feels every bit as disconcerted, with the band rapidly shifting between blasts of fuzz and quieter introspective playing. The avant-funk of 'Parataxis' is built off Dunn and Smith’s steady tempo, with Eisenberg slashing chords and motifs from her guitar, playing at times with and against the rhythm. The stage is set for 'Zoning' against Dunn’s wooly mammoth bass playing and Smith’s understated clatter. The rhythm section provides a lightly spun (but intense) structure for Eisenberg to light-up with some of her most fiery playing of the set. Kiln starts off with an overdriven chord progression that disappears almost as quickly as it began, buckling and collapsing into free interplay. This piece is another showcase of Eisenberg’s dexterity, she absolutely shreds on this track. 'Frayed, Knotted, and Unshorn' kind of sounds like the name implies, it’s very disjointed. Eisenberg and Dunn hit the pedalboards hard on this one, deriving just about every texture you could think of from their simple stringed instruments; the group chemistry is terrific (I bet they had a blast making this record). Ches Smith is so sly that you barely notice that it’s really his sandbox they’re playing in.

On 'Dangerous Red' we get an off-center vamp by Eisenberg via rapidly sliced out chord sequences as Dunn and Smith provide a rumbling bed of rhythm for her to traverse before the piece opens up into another fantastic improvisation. 'Kin Dza Dza' is a brief, fervent, well-timed explosion that finds the band pushing their capabilities (and gear) into the red for about a minute and a half. It concisely answers the question that was building in my mind while listening to this album: “How intense can this get?” 'Mycoaelia' begins with crackling, chirping guitar, rubbery bass, and a wisp of cymbal chatter. It is in turns probing and assertive; jangling melancholy turns to fuzzed-out maelstrom in the blink of an eye, never allowing you to gain proper footing. '6J' is a timbral as much as a rhythmic exploration that displays the band stacking juxtaposing phrases that crackle with intensity between more pensive build-ups of brooding interchanges. The album is capped off with 'Foresworn', a brief improvisation that doesn’t summarize the album so much as it offers one more possibility of what this group can sound like. The variety of sounds and playfulness combined with the intensity of a rock band make this release a real standout.

Available from Tzadik or Squidco ; or if you must, Amazon has it as a download.
Paul on Wednesday, January 30, 2019
Share