Christopher Hoffman had a productive 2018. The cellist recorded on Henry Threadgill’s Double Up, Plays Double Up Plus and Dirt… And More Dirt as well as his own Multifariam and Arrow Of Light and Josh Sinton’s making bones..., the latter three of which are covered here. He’s already back at it in 2019, appearing on Anna Webber’s Clockwise.

Multifariam is 16 vignettes across 37 minutes featuring the large cast of Aaron Kruziki (flute, bass, clarinet, loops), Tony Malaby (tenor sax), Christina Courtin (voice, violin, loops), Michael Bailey (synths, loops), Michael Pitt (voice), Frank Locrasto (Rhodes, Juno, Arp, Panther), Jeremiah Cymerman (clarinet, loops), Ari Chersky (guitar, loops), Craig Weinrib (Drums), and Gerald Cleaver (drums) alongside Christopher Hoffman (cello, loops, bass, keys). Explicitly influenced by MF Doom, Miles Davis, Terry Riley, and John Carpenter, these electroacoustic sketches utilize loops and tone rows to approach a result that in turns resembles hip hop beat tapes and action film scores, or sometimes a jazz-rock that reminds me of Face Ditch and Caveman Shoestore. It’s a fun collage. But its glossy production aesthetic that sometimes sounds like bad blockbuster narratives read might be too cheesy for some listeners. I’m a sucker for the stereotypical cathartic end of films - that feel-good moment after the storm - and tracks like “A Ghost,” “Frontier Surgeon,” and “In Higher Frequencies,” with their delicate, lullaby-like melodies and minor-key drones and bowed strings, fit that mood perfectly. Another standout is “The Upper Chambers,” where a flute drowned in delay and chorus effects is met with Hoffman’s bowing, like an espionage flick in the near east. Given that Hoffman is an aspiring film-maker and making headway into the realm of film (touting relationships with Martin Scorsese and Michael Pitt, whose voice appears on “Quieting”), this is an interesting and worthwhile step towards what will undoubtedly be an increased emphasis on film scoring when he’s not playing premier jazz ensembles. 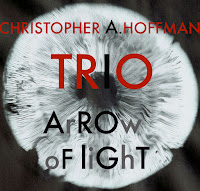 Arrow of Light is a short (4 tracks, 18 minutes) acoustic trio with Adam Hopkins (bass) and Craig Weinrib (drums) accompanying Hoffman (cello). It almost feels staid. Hoffman’s often soloing over a fairly static rhythm section. “The Purge” and “The Election” are nearly head-improvisation-head structures. And the latter is an improvisation on “Oh! Susanna” teetering on the edge of feeling like a sterile Ayler take. However, the recording is nearly all bowed cello - pretty satisfyingly emotive bowed cello at that - which is a treat considering Hoffman more often plucks the instrument on most other recordings. And, despite my reservations previously stated, I find myself enjoying the “The Election” and “The Purge” most. The latter begins with Hoffman and Hopkins plucking a harmony and then some almost-eastern cello soloing over the rhythm section before moving to Hoffman and Hopkins bowing a harmony that transitions to bowed counterpoint before closing out with the plucked head.

Arrow Of Light is a digital-only release available here. Purchasing Multifariam from Hoffman’s site gets you a free copy of Arrow Of Light. 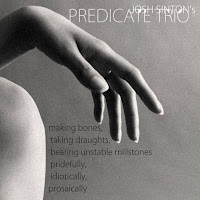 Josh Sinton’s Predicate Trio features the multi-reedist (on baritone saxophone and bass clarinet here) alongside Hoffmann on cello and Tom Rainey on drums, and it debuts on making bones, taking draughts, bearing unstable millstones pridefully, idiotically, prosaically . It’s 47 minutes across 9 tracks, recorded in single takes on a single day at Buckminster Forest. Sinton and Hoffman have recorded together before, on at least Yoni Kretzmer’s Months, Weeks and Days and The Tri-Centric Orchestra’s Agora, Questions of Transfiguration, Vogelfrei, and the synergy shows, with Hoffman often complimenting Sinton’s space when he’s not harmonizing with him. That harmonizing, like on “bell-ell-ell-ell-ells,” “unreliable mirrors,” or “propulse,” recalls the way harmony was used in the music of Steve Lacy, of whom Sinton is a disciple, except it will fluidly transform from and to counterpoint. Though it often seems Hoffman is playing with Sinton more than Rainey, rhythmic interludes on “bell-ell-ell-ell-ells” and “propulse” cast away any doubt that Hoffman/Rainey are a powerful rhythmic unit by the time Sinton returns to the fold. But the stand-out moments, of which there are several, most often come when the trio is playing all together or alone. Like the syncopated sax, punctuating bass drum, and bowed cello vamp recalling “Dogon A.D.” on “taiga” and hissed air notes and gurgling, bass rumbling, and plucked cello sounding like an insect crawling on “unreliable mirrors.” Or the sultry, multiphonic Sinton solos bookending the album - “mersible” on clarinet and “plumbum” on sax - and the fragile, plucked Hoffman solo beginning “a dance.” And, though complex compositions and bravura are present, the emphasis is always on emotivity. A very solid recording for each musician and the trio. Here’s to hoping the collaboration continues.

making bones is available digitally and on CD.