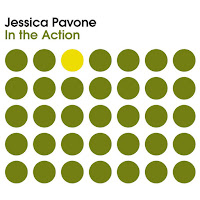 In the Action is the third solo viola album of New York-based experimental composer-improviser Jessica Pavone following Knuckle Under (Taiga records, 2014) and Silent Spills (Relative Pitch, 2016). She is also known from her singer-songwriter duo with guitarist Mary Halvorson, her work with Anthony Braxton's Tri-Centric Orchestra, the art-rock group JOBS, and her own String Ensemble.

Pavone describes her intimate relationship with the viola as "larger-than comfortable”, and indeed, this short album (only 27-minutes long) emphasizes her idiosyncratic aesthetics. You may find yourself drawn into a minimalist universe characterized by its very own senses of time, space - the tangible, physical space between Pavone and the viola - and her belief that cultivating a strong physical body is a core part of her creative process - as well as the space of the recording studio, and the strange but engaging sounds and noises.

Pavone composed four distinct pieces for In the Action, all employing extended bowing techniques, and focusing on in repetition, song form, and sympathetic vibration, with clever usage of effects. The first one "Oscillatory Salt Transport" suggests a series of gentle, resonating waves that somehow bridge between the strict, highly disciplined minimalism of New York and sensual, folk melodies of the British isles. This piece actually refers to the waves of the ocean and how they are essentially pushing salt around the world, as mirroring cycles that occur in nature. On "And Maybe in the End" Pavone morphs a series of chords produced by strumming the viola strings through a chain of effects, suggesting a delicate and quite emotional ripples of electronic haze.

"Look Out - Look Out - Look Out" changes the atmosphere drastically and the acoustic sounds of the viola are processed and mutated so heavily that only repetitive, buzzing patterns of beating industrial noises are left, but as a kind of hypnotic spells from a friendly planet. The last title-piece was performed in a single take and here the acoustic viola of Pavone corresponds with a prepared electronic drone, patiently disciplines the noisy drone into evocative, song-based texture.