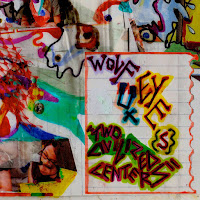 What can one say about Nate Young and John Olson, the binding elements of this split recording? Readers of these pages might recognize their duo (formerly a trio with Aaron Dilloway) Wolf Eyes through their 2006 collaboration with Anthony Braxton Black Vomit or their devasting 2004 breakthrough Burned Mind. Others who are more hardcore or just more informed than I might even recognize Olson and Dilloway’s work with Gretchen Gonzales Davidson in Universal Indians from the late 1990s. Two Civilized Centers is less aggressive than those releases, but, I think, nearly as potent.

It begins with a steady pulsing beat. Electrified sax and synth effects slowly build around the baseline palpitations and gradually layer into a surprisingly rhythmic piece of music reminiscent of early Krautrock a la early Sprung aus den Wolken or, in the periodic muted vocals, some of the more minimalist Sonic Youth side-projects. As has been customary with more recent Wolf Eyes output, the tension bubbles just under the surface. The overall effect is entrancing, until it disintegrates into a demented circus of fragmented techno beats at its end. Solid, compelling Wolf Eyes all the way.

The other side to this cassette and digital release is occupied by Universal Eyes. Two parts Wolf Eyes (Young and Olson), one part Dilloway, and one part Davidson. One can hear the similarity between this configuration and Wolf Eyes. Indeed, both sound as if they are writing a soundtrack for some desolate, postindustrial landscape. That said, the aesthetic effect is quite different. The first Universal Eyes track, “Civilized Two,” has no traceable rhythm or recurring beat. Rather, the backbone of the piece is a stream of interlacing hums. Partial melodies, electronic hisses, pumping gears, and electro-metallic echoes fade in and out of perception. “Civilized Three” consists of similar elements and evokes similarly bleak environs. The music is somewhat softer, but just as disturbing. One hears howls and fog-horns, metal clanks and various other drips, hums, and clangor. It is difficult for the listener to find consistent threads to latch onto. But, maybe that is the purpose. One must wander in search of something familiar on which to fixate. In this soundscape, however, one only finds the whisper of a melody, the remnant or premature abandonment of a steady beat, and the ghosts of a freshly departed (or at least unrecognizable) civilization. Then again, one also gets the sense that all of this is also a celebration not necessarily of that barrenness, but of the those who stayed behind to revel in the newly open musical space. In other words, this is not just noise. It has real nuance and vision, as one might expect from this seasoned group of musicians.