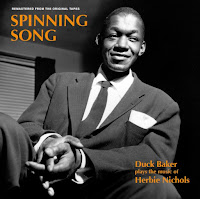 Before dropping the needle on this beautiful color vinyl pressing of Spinning Song: Duck Baker plays the music of Herbie Nichols, I must admit that I wasn't too familiar with the composer. Herbie Nichols (1919 - 1963) was interested in an adventurous mix of Caribbean folk, dixieland, and bop, and was a contemporary (and friend) of Thelonius Monk, but was not well known during his short life time. Nichols found some recognition in the composition of the song that became Billie Holiday's staple "Lady Sings the Blues", but aside from some recordings with Blue Note, some of which were released only posthumously, his music was hard to find until years later. He passed away at age 44 from Leukemia in 1963.

Last year, finger style guitarist Duck Baker released the wonderful Plays Monk. The album showcased the guitarist's focused and folksy arrangements of ten Monk compositions, and Spinning Songs, which was first released in the mid-1990s, was apparently Baker's first foray into jazz. What an entry it was! In his liner notes, Baker talks about how he encountered Nichols' music in the 1970's when a friend Bruce Ackley chanced upon a copy of a very rare original Blue Note pressing. The music, Baker says, didn't 'blow you out' but rather offered something tantalizing in its subtleties.  Nichols music, as Baker's illuminating notes explains, is less jarringly different than Monk's but when you dig into it and begin playing, you realize the knotty conundrums that lie in its construction. I suppose it would be like walking up some perfectly normal seeming stairs only to realize that they were constructed by M.C. Escher.

Baker seems to embrace all the possible dimensions, and his arrangements are absolute gems. In a sense, if you haven't made the deep dive into Nichols (which nowadays isn't very hard to do), then you probably will not know the tunes aside from "Lady Sings the Blues" and can approach the album without making comparisons to the original. This is the approach I favor since I haven't made that dive myself, yet.

The album begins with "The Third World", which sports a lithe jaunty melody that Baker keeps upbeat and light with a consistent bass note pattern. Baker then spins a web of improvisation over the skeleton of the song. It's possible to get lost in it, even though it's just one guitar, with so many things in motion at once. At the edges of the chords, and on some of the notes, you can hear the rattle of the guitar, which Baker makes note of in the liners, mentioning that he chose to use "a miniature Mexican guitar with built-in distortion".

The follow-up "The Happening" features some gutsy bluesy lines that lends the arrangement with a certain swagger. A true treat for the ears, but not one to get too comfortable with, as there are unexpected changes and note choices throughout. The third track is the previously mentioned "Lady Sings the Blues", which carries some gravitas. Baker really digs at the fretboard on this one, popping and plucking at the strings with purpose. "Nick at T's" is possibly the most Monk-ish of program. It speeds along with alacrity and leads us to the deliberate stride of "House Party Starting." Again, the stark melodic strands weave delicately and purposefully to present and enjoyable melodic tune, with the now expected unexpected twists and shadings.

Apparently Nichols had a relationship that he was unable to get over and his song "Portrait of Ucha", in Baker's hands (literally) is in imbued with the pathos of such a relationship - from the melody that vacillates between joy and melancholy to the classical style in which Baker approaches it. Finally, the title track "Spinning Song" is a dense puzzler, following its own path. Baker injects filigrees and small sweeps of folksy wisdom in the jagged melody, but there is also an alluring impenetrability.

It has been noted here before that Triple Point doesn't release many albums, but each one that they do is prepared and presented to perfection. This one is pressed on a lovely clear red vinyl, which contrasts nicely with the orange, black, and white color scheme, and the quality of the product is reflected in the slightly higher than average price point.

Like the Monk album from last year, this is another must hear. While finger-pickers may salivate over the clean shifting bass lines and clever fills, everyone can enjoy the thoughtful and thorough arrangements of the tunes.

This was originally released on CD by Zorn's Avant label in the 90s.

I first heard Nichol's compositions on a Soul Note recording,Change of Seasons,with Misha Mengelberg, Steve Lacy, George Lewis, Harjen Gorter and Han Bennink and would highly recommend(if you can find a copy...)

That's an excellent callout, wm. Lacy/Mengelberg/Bennink (often with Lewis & Reijseger) visited Nichols quite a few times, on Two Programs, Dutch Masters, and Regeneration as well as Change of Season, often alongside Monk and often to great effect. This cluster of recordings is also how I was first introduced to Nichols. His original recordings are great though, recorded by Van Gelder and backed by Roach or Blakey for his big Blue Note ones and Love Gloom Cash Love top notch too.

I first was aware of Nichols in the late 70s, I think. Some company, maybe United Artists, bought Blue Note and began releasing two-fers of their old catalog with covers that were colored like grocery bags. A guy in a record store just said "buy this" and better advice I've rarely received. They were pretty good pressings too, which was good because I played those suckers constantly. Roswell Rudd, a big champion of Nichols, wrote the extensive liner notes. The New Dutch Swing guys were all big Nichols fans.

Captain, that reissue series was fantastic. I was introduced to Andrew Hill via One for One and Sam Rivers via Involution. There was also Jacknife by Jackie McLean and others.

One young pianist who bought that Blue Note two-fer after hearing the Misha Mengelberg recordings was Simon Nabatov. He went on to release a Leo CD (Spinning Songs of Herbie Nichols) and a PanRec DVD (Simon Nabatov Plays Herbie Nichols), both of which I rate very highly.