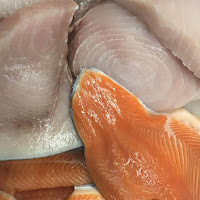 The musicians that comprise Chicago's best new free trio (this side of Kuzu) aren't the kind of players that seem to relish the spotlight much. These guys are Serious Band Musicians, one and all. Gerrit Hatcher (tenor sax) and Julian Kirshner (percussion) are both young enough that you'd be willing to forgive any showboating (which they could easily do) – but ya see, they're smart enough to know that playing for the music itself reaps the highest reward. I doubt they came upon this wisdom from their elder Peter Maunu (guitar) directly – not because he isn't wise, but because Hatcher and Kirshner are sharp as shit – especially where creativity is concerned. It's one reason why the trio works so well as a unit: the two young guys are up to Maunu's level as musicians and intuitive creative collaborators.

A minute and a half into “Cold Seeps” the broken stops-and-starts become agitated and build into a ranting Ayler dust storm, threatening to fly off into a variety of directions. Hatcher's tone is hard and he plays mainly in short phrases, even when blowing overtones. His style is direct and often conversational - but authoritative. Maunu quickly leaps from distorted mud to simple water droplet slide-guitar pings, always appropriate & precise. Kirshner is a meditation master at his drum throne – the guiding light that sees all, gently noting each change and reacting accordingly. Maunu brings out his violin at the nine-minute mark, adding new textures to the creation-in-action. Although not credited on the sleeve, Maunu plays a plastic bird whistle on “Terns” as Hatcher plays avian runs, often flying into Kirshner's chimes and pie pans.

Careful plodding from Kirshner motivates Hatcher to play some smart melodic lines on “Honey Is Flowering In All Directions” as Maunu wraps elliptical guitar lines around the music, which gets especially heated around the five-minute mark when Maunu alternates between jazz-tone Montgomery-isms, Quine scrape-jabs, and Sharrock rust-smears. (No Wave fans, Maunu's your man!) The pensive bit that follows is unexpected with Hatcher & Kirshner going wherever the Impulse! leads. Maunu enters again, distorted power chords, lifting the music upward toward an eventual plane of spiritual beauty (of the Coltrane persuasion, yes). Then Maunu rips to the finish line with finesse. Brilliant.

“Plaice” features Maunu (on violin) and Hatcher pushing each other into harmonic challenges while Kirshner casually supports both while elevating the music with authority and purpose. “Nature Near” closes the disc with a long, strange sunrise. Lovely lines from Hatcher, contemplative sonics from Kirshner, and a guitar tone from Maunu that sounds like an accordion(!) continue on the Coltrane path that appeared earlier. Kirshner nonchalantly pushes just enough for Hatcher's gradually elongating phrases to flower, while Maunu lifts the sun. Then a curtain is pulled back farther to show Maunu playing celestial pinball while Kirshner & Hatcher pan for gold in the desert. You figure it out.

All ridiculous superlatives aside, this disc is an extremely satisfying listen. It remained in my car for months – long enough for me to feel that I wouldn't even be able to hear it with fresh ears again. Thankfully, this music contains so many layers that it surprises continually.