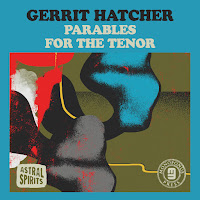 Although Gerrit Hatcher is a relative newcomer, Parables for the Tenor marks his second album for solo saxophone. Kicking off with “Fanfare for the Bankrupt,” Hatcher's dry, smoky tone invokes melody, softness, overtones – and harsh, gravelly speed-runs in the first 30 seconds. And it makes logical sense – such sense that you'll wonder what anyone else could've played as a resolve. Tea kettle, dead mid-register tone, silence, low blurt. Ever wonder what a smackless Kaoru Abe would sound like? More cohesive, less nods, similar energy and idea scope.

“Fanfare” is kind of a primer, almost an overture, for things to come. “The Offer” is basically an extension of the concepts introduced on the first track, alternating blasts with short pauses and culminating with a melancholy melody racing itself into a blur of Pharoah overtones. On “Processional,” a clear theme emerges from the outset which Hatcher bends and stretches, jumping away from and then back into, testing its elasticity, jumping out farther with each consecutive leap. Toward the end of the piece he crawls into the butthole of the thing and flips its body inside-out. For musicality and biology, he earns his A+ here.

Soft Hatcher sure ain't no smooth jazz. On “A Dream from Sleep During Sunrise,” it's a weird Ayler-does-Prez thing that tiptoes through a tentative theme that we're lucky enough to eavesdrop in on. His short phrasing works well here, fluttering around a theme, as it does on the follow-up track, “The Measures,” until flying way out into overtone land – and I mean waaay out, like Arthur Doyle out. The acrobatic act keeps the listener in constant suspense – an essential element in keeping one engaged throughout an album-length solo recording.

“Learn Alternatives to Mercy” is a vehicle with different size wheels at each end of both axles. Three-note phrases rip through the middle section, eventually becoming exotic bird screeches – then toning down to a warm flutter, alternating with the bird shrieks toward the end. As of this writing, Astral Spirits has 14 of these cassettes left on its Bandcamp page. Run!