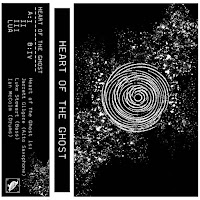 OK so by now the second HOTG album has been released – but two things. I haven't heard the new one yet. And I'll be late for my own damn funeral, so here's what happened the first time around. As you probably already know, HOTG is D.C. Bassist / workaholic / impresario Luke Stewart's trio with Jarrett Gilgore (alto) and Ian McColm (drums). The cassette is already sold out – but you can get a download for a mere five bucks on Bandcamp, which I highly recommend getting. Cassettes suck anyway.

Side A:
Gilgore & McColm kick things off with a bang, soon joined by Stewart. Around the 2:30 mark, it goes quiet w/ Ian on brushes. Gilgore's lines become fairly long and oddly accented, like he's having an intense conversation with himself as Luke and Ian attempt to push things in a new direction. Stewart bows wildly as group intensity rises. A rickety boat begins to sink following the freak-fest. You can almost smell the rust on this manliest of vessels. The members of the trio align themselves to the sole cause of getting the thing to shore. Conversations are tense, but cooperative. As soon as it's docked, Luke lets loose with a riff and all join in, pushing with forward momentum. Gilgore rides on top of the groove, tethered to it, attempting to break free. Ian and Luke cage him.

Side B:
A slower intro this time, leading into a thoughtful solo by Stewart. Gilgore and McColm join in at the perfect time, elongating and elaborating on ideas laid out by Stewart. Gilgore eventually takes the lead and sets a melodic pace for awhile, even as Luke and Ian begin scraping and scratching underneath. As you might expect, Luke & Ian get their way in the end, with the music collapsing in on itself several times over. Poor Jarrett Gilgore. Dude can't get a break. I hope the other guys aren't so jealous of you the second time around!