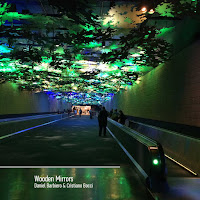 
Wooden Mirrors offers a surprisingly apt description of this transatlantic duo (U.S. / Italy) collaboration of contrabassists Daniel Barbiero and Cristiano Bocci (who also plays synthesizer on the second of the two tracks presented here). One doesn’t usually think of wood as reflective either of light or of image, but sound & voice are what reflects here instead. The title track Wooden Mirrors (two carved objects in complimentary motion) introduces an unapologetically no frills bass viol duet recorded with fidelity just shy of two full bodied basses surrounding a listener live, each panned to either side of one’s own listening space as in intimate house concert.

Reciprocal listening generates the engine of this spontaneously composed conversation. Often, one player almost perfectly mimics the other, just enough out of sync to grab a listener’s breath with the drama & uncertainty of this abounding variegation. There’s also divergence, commentary, digression and counterstatement, but each player’s moves exposes a continuous awareness of the other’s creative agency & process. This is more than “free music”; this achieves dialogical composition.

For listeners in love with bass viol sound, with that long-wave confluence of wood grain, air, wire, tension, tree sap, horsehair & gut, both bassists dedicate luxuriant tone & attack with inventive sympathy for the various sound regions & personae embedded within the sonic landscapes indigenous to this remarkable instrument. In other words, they’re absolutely all over their instruments.

Bocci switches to synthesizer as foil to Barbiero on the subsequent track. The default tendencies of this far younger instrument, however, tends to reposition the bass instead as foil to what comes most easily to a synthesizer’s software. From a Concourse begins with refractions of pizzicato bass phrases, evoking a fractal elongation of bass possibility. This hall of mirrors redistribution of bass initiatives via synthesized sampling almost hypnotically envelops a listener within a richly expansive sonic labyrinth. But, this also seems to come with a cost, as the synthesizer reaction can’t match the pace of hair trigger interaction that distinguishes the bass duet.

This technical handicap displaces the previous duet’s equality of voices in mutual recognition and slows that flow of ideas, but Bocci’s accumulating textures nevertheless morph organically from one agglomeration into another still infused with the discovery logic of improvisation. Barbiero, now playing both sound source & accompanist, negotiates this shift into more fixed foreground-background relations with continued taste, pacing & sensitivity. The digitally interposed waiting shifts emphasis away from the interactive contingency toward panoramic generalization, evident especially where a repeating loop succeeds toward autopilot amid the sort of exaggerated reverb so available to synthesizer vocabulary.

This is experimental music, & experiment, by definition, yields widely mixed discoveries & outcomes that then feed into the next foray. What we get to witness via this recording is an exploratory process engaged by two deftly capable & imaginative musicians in a fertile, ongoing collaboration; & the more you listen, the more you’ll hear.