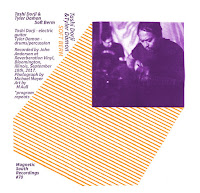 
Recorded live in Bloomington, IL in 2017, Soft Berm is a lo-fi, monophonic cassette that will probably be discussed in hushed tones in the very near future. “Yeah, well did you ever hear Soft Berm?” One of those. The cassette is already long gone, but the download can be had on Bandcamp. (For now.) I also want to make clear that this cassette is not the starting point for getting in on the Dorji/Damon craze; but it is absolutely essential for those of us who have been indoctrinated.

Opening with moody 80s Sonic Youth clang, the lo-fi atmosphere immediately asserts itself as a positive. By the 3.5 minute mark, Dorji and Damon are already in the zone & the now familiar gorgeous drone and violent crashing of waves are in full bloom. The pure joy of these sounds overwhelms.

Seven minutes in, Damon takes a solo using a pair of what sounds like wicker shakers. Dorji chimes in with dissonant plucking. Something is weaved into the guitar strings so the sustain is gone, making everything a percussive stab. There are occasional plucks on the lowest string (tuned lower than an E), which is not muted as it booms out loudly. Once the energy level picks up again, Damon's manic groove kicks down so hard Dorji is forced to clang in time. Feverish.

An otherworldly approximation of Beefheartian ethno trashgroove dominates later on with Dorji looping a bit and adding atmospheric additions over the top. (Damon does not get enough credit for being such a master of groove, btw.) A crazy storm starts brewing with howling and wind chimes clanging together. It finally hits, blowing over everything in sight. The post storm rubble doesn't leave much to work with though, and the last several minutes feel tagged on. But you'll still look through the smoke to see what's happening.