Jozef van Wissem and Jim Jarmusch – An Attempt to Draw Aside the Veil (Sacred Bones Records, 2019) **** 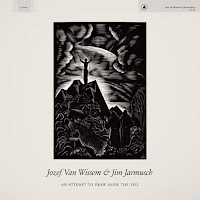 How does one begin to describe this duo? First, Jim Jarmusch isthe Jim Jarmusch, director and sometimes screenwriter ofDown By Law, Stranger than Paradise, Ghost Dog, Coffee and Cigarettes, Broken Flowers, and Mystery Train, to name a few. He also plays guitar. Jozef van Wissem has less renown, though, as this album shows, he should, as one of the most creative, accomplished, and heavy lutenists today.

It would be easy to brush off An Attempt to Draw Aside the Veil as a venue for a creative artist in film to simple dabble in another, enabled by name recognition rather than encouraged by talent or purpose. That, however, ignores Wissem’s contributions to this album. It also ignores Jarmusch’s. If one can say anything coheres the latter’s myriad films, one must list a) slow, plodding development generally around a theme rather than a concrete plot and b) vision. This album has both.

Tracks are based around the works of William Blake (the final track is titled “When the Sun Rises Do You Not See A Round Disc of Fire” from Blakes “A Vision of the Last Judgement), as well as the works of two figures with whom I am not familiar: theologian and philosopher Emanuel Swedenborg and occultist and philosopher Helena Blavatsky. They also range from the dark and atmospheric (“Concerning the White Horse” and “Dark Matter”) to the goth-influenced medieval-melodic (“The Unclouded Day” and “Two Paths”) to the spacious, but eerie ambient (“Lost Continent”) to the rather hopeful and minimalist (“Final Initiation”). At times, one hears entrancing loops and hints of Asa Osbourne (Lungfish, the Pupils, Zomes). At others, the dense, wandering layerings of Lou Reed’s Metal Machine Trio. At still others, the lute - an instrument I rarely encounter especially in such doom-laden improvisations - takes over and makes for an utterly unique and, at times, even pleasant listening experience. This album is varied, thoroughly interesting, coherently dark and, even at moments of relative levity, heavy. Then again, what would one expect from today’s foremost experimental lutenist and the writer/director of Dead Man?